Dota 2 has been released back in 2013, but it’s still one of the most competitive games in the world of eSports. And if you’d like to play Dota 2, you’d want to have one of the best laptops for Dota 2.

We know how hard it can be to find a perfect gaming laptop which will have a decent configuration and yet allow you to play games anywhere you go.

Therefore, we’ve spent hours making a list of the 5 best laptops for this purpose and we’ve tested them to write in-detail reviews. Therefore, you can find ideal gaming laptops for Dota 2 in categories such as 4K display, affordable pick, and even the most high-end choice.

We wanted to do everything to help you find your next laptop for Dota 2, and if you read this article until the end – you will most likely make a choice you won’t regret!

Dell Inspiron 4K is powered by some powerful components in order to achieve a true 4K resolution.

Therefore, you will find that Inspiron 4K is running an i7 quad core processor combined with GeForce GTX 1060 dedicated graphics card.

It might not be the lightest or thinnest laptop on the market, but it’s a gaming laptop which utilizes its “flaws” to provide an increased connectivity.

But on the other hand, this laptop keeps its decent style which is rather minimalistic, but it goes really well with the overall theme of this gaming laptop. 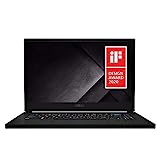 MSI GS66 Stealth
If money is not an object and you’re looking for a laptop that can run any game title on the highest settings and the highest resolution – MSI GS66 Stealth is the right choice. It’s one of the most powerful gaming laptops on the market with an amazing IPS display and components placed inside a very attractive chassis.
CHECK PRICE

MSI GS66 Stealth utilizes an IPS display which can achieve 300 Hz frequency with a very low latency of only 3 ms. It also has a 10th gen i9 processor which is overkill for a game like Dota 2.

But despite being overspeced for the job, it will allows you play competitively allowing you to get that killing streak going.

However, the biggest benefit is the razor thin bezel which offers wide-view angle and yet it makes it very compact.

MSI GS66 Stealth provides a very large trackpad surface which is made out of silky glass that doesn’t only feel premium but it is very smooth to use.

Combine this with 10+ multi-touch gestures available and you will love every swipe you make. We felt really comfortable using the trackpad since we were not worried about the space.

What’s even better is that each key has its own RGB light that you can adjust and customize to your personal preference.

ASUS TUF
If you’re a passionate Dota 2 fan, you can rest assured knowing that you can still find a very decent and yet affordable laptop such as ASUS TUF. It’s a very attractive and sleek looking laptop with a decent Ryzen configuration placed inside the laptop, giving many fun hours of playing the latest titles.
CHECK PRICE

Even though this is categorized as an affordable gaming laptop, it has plenty to offer – and if you ask us, one of the best features is the quality NanoEdge display.

Not only the screen has very narrow bezel that increases the screen to body ratio up to 77%, but it is also based on the IPS display which provides bright & vivid images whether you play Dota 2 or any other game.

ASUS TUF is not the thinnest gaming laptop out there, but it has an increased connectivity which offers the most common and universal ports that exist.

With this being said, you won’t have to worry ever again about connecting other devices to your laptop or whether you will have plenty of ports for each device you own.

You might not find a very powerful Intel configuration in this laptop, but ASUS did a really good job by going for an AMD configuration which is a bit cheaper, easier to place inside the laptop, and is almost as good as Intel.

Therefore, you can expect the gaming firepower offered by the AMD Ryzen 7 3750H processor in combination with a NVIDIA GeForce RTX 2060 graphics card.

This is more power than necessary to run the latest game titles without any lag. 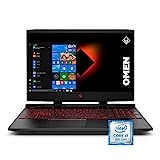 HP Omen
HP Omen features an amazing Dragon Red backlit keyboard which is ideal for Dota 2 due to its anti-ghosting feature. This means you get to press up to 26 keys at once and each one of the keys will get registered. Other than the keyboard, you will love the incredible design with a serious configuration hiding in the chassis.
CHECK PRICE

The size of this laptop might intimidate you, but you don’t have to worry. HP Omen is a 15.6” laptop, but HP did a really good job at balancing out the weight and design overall.

We have noticed that this laptop has a very low profile for a gaming laptop which is great, and even the weight isn’t as bad as we expect from gaming laptops.

Along with a powerful quad-core Intel processor, there is a dedicated graphics card NVIDIA GeForce  GTX 1660Ti with up top 6 GB of VRAM.

This graphics card has its own dedicated RAM of 4 GB which is really hand when playing games that rely a bit more on the graphics processing than CPU.

While we find these speakers to lack a bit of bass, they’re still crystally clear and are ideal for gaming whenever you don’t have your gaming headphones around you.

They might not be the best, but hey, they’re very decent even for entertainment and some light music.

Asus ROG Strix Scar III
ASUS ROG Strix III isn’t the thinnest laptop on the market but it’s definitely a gaming laptop with increased connectivity. This allows you to connect your gaming peripherals and enjoy hours of gaming with the power brought to you by the latest Intel configuration and a very good looking display.
CHECK PRICE

ASUS ROG Strix features a very sleek and minimalistic design which keeps a low profile and yet they still managed to add up to 7 ports on the left side and 4 ports on the right side.

Equipped with the 9th generation of Intel i7 processor and a NVIDIA GeForce RTX 2060 graphics card, is there anything more a gamer would wish?

This high-end configuration will give you a lot of FPS (frames per second) in Dota 2, but you will also be able to run the latest game titles on ultra high settings without lag.

ASUS has invented their own Aura Sync technology which works well with the RGB gaming keyboard integrated into ROG Strix Scar.

It allows you to fully customize the keyboard and even change the color of each key separately, thanks to the fancy RGB placement.

Acer Nitro 5
Gaming laptops need not be expensive powerhouses over $1000. You can settle for a functional and affordable gaming laptop like the Acer Nitro 5 . It can play most AAA titles and it can definitely play an old game like Dota 2.
CHECK PRICE

If you’re on a budget but you still want to play video games with your laptop, then the Acer Nitro 5 is a highly recommended option.

Its an entry level gaming laptop that has pretty amazing specs.  It features a 9th gen Intel Core i5-9300H  CPU, a NVIDIA GeForce GTX 1650, and over 8 GB of RAM. That’s powerful enough to play most AAA titles.

Of course with that being said, the laptop is also powerful enough to play Dota 2 since it is a pretty old game.

Alienware M15
If you like a gaming laptop that keeps its fans silent and system cool, then you’d like the Alienware M15. It features the Alienware Cryo-tech v3.0 which dramatically lowers your systems temperature allowing for a full gaming experience.
CHECK PRICE

Asides from being a powerful laptop with a 9th gen i7 processor and a  RTX 2060 , the Alienware M15  features out of this technologies that enhance your gaming experience.

One of the more popular features it has is its Alienware Cryo-tech v3.0 which greatly reduces heating allowing you a more fulfilling gaming experience with  Dota 2 or any other game. 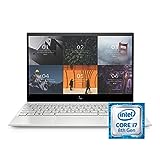 HP ENVY 13
If you’re looking to play Dota 2 while on the move, then you might want to check out the HP Envy 13. Its a 13 inch lightweight portable laptop that has ample power to play Dota 2 and other mid-end video games.
CHECK PRICE

The HP Envy 13 is only 13 inches in size and it weighs very light. Despite its light build it has ample power to run most video games with its Intel Core i7-8565U CPU and 16 GB of RAM. It also has a decent graphics card with the NVIDIA GeForce MX250.

And although its GPU isn’t as good as the ones on this list, it’s more than enough to play Dota 2.

You will want at least a dual-core processor at 2.8 GHz, 4 GB of RAM, and a dedicated graphics card either from AMD or NVIDIA.

Another thing you should note is that Dota 2 requires DirectX 9.0 version (which is pretty common nowadays).

Dota 2 has no specific graphics requirements, other than the graphics card – but you would want to get a laptop with a decent gaming display.

Most modern laptops come with specific laptop screens suitable for gaming. They include a higher refresh rate, lower latency rating, and they are most of the time based on the IPS panel which provides incredible detail, high resolution, and vivid colors.

Since you are going to be using a gaming laptop to play Dota 2, you will have to pay attention to the keyboard gaming laptops offers.

Most of the laptops feature mechanical keyboards which are very similar to the dedicated gaming keyboards you would use with a computer.

Gaming laptops are mostly thick and heavier than average regular laptops, but this has its advantages. One of the biggest advantages is the increased connectivity.

Most gaming laptops will offer plenty of USB ports so you can connect your peripherals, but also many of them will include HDMI and even an ethernet port.

Also, we highly recommend checking for a jack port so you know you can connect your gaming headphones easily, unless they’re Bluetooth.

You should make sure that you get a storage drive which will have sufficient amount of space to store all your games, software, and entertainment.

We highly recommend checking out SSD storage type since it a lot faster than the typical HDD storage drive. If you’re someone who uses a lot of space you might even be able to find a laptop which combines both SSD and HDD storage drives.

What are Dota 2 requirements?

Dota 2 isn’t the latest game title so it can be run on any decent gaming laptop. The requirements are either Intel or AMD processor at 2.8 GHz or higher with at least 4 GB of RAM and NVIDIA or Radeon graphics card. Also, you will need 15 GB of available storage.

Is the graphics card important for Dota 2?

Dota 2 relies more on the CPU and it requires a stronger processor power but the graphics card is important for fluent gameplay and to achieve a decent amount of frames per second. We recommend at least GeForce 8600 or higher and Radeon HD2600 or higher.

Should I install Dota 2 on HDD or SSD?

If you have a larger SSD, we highly recommend you to install Dota 2 on SSD since it will improve loading speeds and slightly improve the performance. It takes only about 10 GB, but installing Dota 2 on HDD is also a great choice. Sometimes you don’t have a choice which is fine.