If you’re going to spend the money on a gaming laptop, why not pick the sleekest models with the most advanced engineering and design?

Portable gaming is expensive already, so if you’re going to save up for a high end rig, you might as well go with the best. While most gaming laptops are bulky machines, all of these Razer models are thin and lightweight for their capabilities.

Whether you need a budget pick, a tiny 14” ultrabook, or a massive 17” desktop replacement, we’ve got you covered with 5 top Razer gaming picks.Before we get started, there’s just one word of warning to keep in mind — be careful about anything labeled a “Stealth” model from Razer.

Those models typically ditch the graphics card altogether for a thinner, lighter build. That’s great for portable productivity if you need an ultrabook, but bad for gaming. 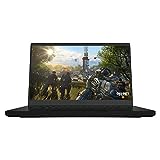 Razer Blade 15
Want a fast, high end gaming experience in a sleek package for a price a little below $2,000? The Razer Blade 15  is a good pick with its future proof design and specs which will ensure that you’ll be using this premium laptop for years to come. This version of the Blade 15 line is our top pick for the best budget Razer gaming laptop currently available.
CHECK PRICE

The Razer Blade 15  is a reliable and powerful laptop if you want a “budget” Razer laptop that will suit your needs. It has really powerful specs and it’s one of the cheapest laptops on this list which makes this a “budget” laptop.

We need to strongly stress that the term “Budget” is definitely a relative term when it comes to gaming laptop models.The cheapest units from Razer are still significantly more expensive than your average computer.

What we really like about the Razer Blade 15 is that it is very  feature rich.Surprisingly, this is a bloatware-free model, which isn’t typically found in “cheaper” units, but is a welcome addition to any Windows machine.

To keep the price low, this model balances data speed with storage capacity. The SSD is only 128 GB — not much by modern standards — but you still get that full 1TB HDD for storing files.

The Max-Q 1060 GPU is more than enough for any game currently on the market, but it is important to note that won’t always be the case.

You get slightly less performance than the full size GTX 1060, but this model is still technically VR capable, so there really isn’t much you can’t do here in terms of gaming.

And most importantly the laptop was designed for future proof considerations. The Max-Q version of the GTX 1060 will become the mid-range to bottom tier option within the next two years as the RTX series becomes more predominant. So your $2000 dollar investment won’t go to waste.

If you want to have stable, high frame rates on absolutely any game at ultra settings for the lifespan of your laptop, you should probably go with a more expensive model.

There is an upside here though — this motherboard can handle up to 32GB, so you can double your memory down the line. With that upgrade installed, you can keep the Razer Blade 15 lasting much longer. 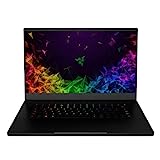 Razer Blade 15 RTX
Don’t care about the cost  and just want to get the most power under the hood as possible? This is our top pick for the best high performance Razer gaming laptop, although the price tag reflects the high end specs! This version of the Razer Blade 15 features a powerful GeForce RTX 2080 GPU.
CHECK PRICE

This unit is overall very close in specs to the model listed above, but with one major change — you get one of the best possible graphics cards currently available.

Now to be honest, we don’t actually think the RTX graphics cards are worth it quite yet, especially for laptops.

The games available today don’t take full advantage of the RTX features yet, so you are paying a premium for hardware that can’t be fully utilized at this point in time.

That being said, There is a very compelling reason to go with them if you have the money, however.

You’ll simply never have to upgrade again on the graphical front. The RTX 2080 is the best you can possibly get in this generation of GPUs, and it will dominate anything you throw at for years and years to come.

If there’s one downside to this model, it’s that the high price tag is only justified by the graphics card and not the other specs. It costs almost $3000 so it might be too expensive for some people.

Other brands that don’t utilize this same ultra thin design usually cram a full 32GB of RAM in at this price point for instance, so you are losing a bit of performance in exchange for graphics power.

That being said, the memory is expendable, so it really isn’t a big deal. You can hit that 32GB threshold if you buy new RAM later on. 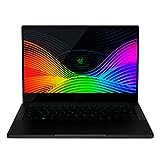 Razer Blade Stealth 13
Prefer the thinnest, lightest model possible while still having the power to play modern AAA titles? Well, if you don’t like the idea of carrying a heavy and bulky gaming laptop around then you are in for a treat because the Razer Blade Stealth 13 is neither of those!This is our top pick for the best portable & lightweight Razer gaming laptop for the ultimate in gaming on the go!
CHECK PRICE

Razer offers several different sizes of their flagship Blade series, from the 13” Stealth series to the massive 17” Pro line of models.

When you want a laptop the size and weight of an ultrabook that still has gaming power, the Razer Blade 13 is the way to go.

Notably, this model features a full 512 GB storage capacity, but with a faster, quieter SSD instead of the typical hard disk drive.

There are other other portable options as well.  If you’re a collector and want to get a reliable laptop that isn’t in production anymore, then. You might want to get the Razer Blade 14.

The Razer Blade 14” line isn’t in active production anymore, so you’ve got to go refurbished if you want a gaming laptop at this particular size.

That’s not as big a deal as you might expect, since these refurb units are repaired, cleaned, and restored to factory specs. It’s like getting a new machine, but at a lower price.

Not interested in a refurbished model? Then you’re better off sticking with the Razer Blade 13.

For instance, there are a few versions of the Stealth 13 model that feature a GeForce MX150 GPU. This version on the other hand has a reliable and  high end CPU and as well as a 4K monitor for immersive gameplay.

Razer Blade Pro 17
Looking for the raw power and excellent display quality of a desktop machine, but want something that can be carried around in a portable version? Although the price tag is quite high, this is our top pick for the best 17” Razer gaming laptop currently available. It's also the most powerful Razer laptop on this list with a 10th gen i7 processor, a GeForce RTX 2080 Super, 16 GB of RAM, and a 1 TB SSD. It simply outmatches the other laptops on this list by raw specs alone.
CHECK PRICE

In terms of having a full desktop replacement, you won’t find many laptops with better specs than Razer’s 17” Blade model.

With per-key RGB backlighting, a surprisingly thin design, and extremely high end hardware, you get excellent performance and a great visual style here.

The RTX 2080 Super is the one of the best graphical cards currently available, so you won’t ever need to worry about losing frame rates while gaming.

With a full 16 GB of RAM, this is a machine that is ready for absolutely any game or even other applications like high end video editing software.

There is a downside to all that hardware in such a small package, however.

Being sold at almost $4,000 you are approaching the price of an entry level car, so you’ve got to really want the best possible gaming laptop to even consider this model.

While still fairly thin, with a 17” monitor of course you’ve got to understand this model is also heavier than our other picks at 7 pounds.

Finally, this model’s chassis is a major fingerprint magnet, so have a cleaning cloth handy at all times!

Most Razer models feature very similar design, but there are a few differences between different sized units.

With Razer, the high price tag of each model is offset by the excellent build design.

We recommend picking anything from this brand that’s under 5 pounds for the most portability. The only reason to ever go over that weight is if you are looking at a larger 17” desktop replacement.

Be sure to always be on the lookout for models with “edge to edge” displays, with have tiny bezels that offer more viewing area.

Due to the high cost of Razer models, always carefully compare the number of ports, the type of backlighting, and any extras like free games.

If you want to get the most out of your Razer, we recommend picking a model with a Thunderbolt port, at least two standard USB ports, and an HDMI port.

Keep in mind that some Razer models offer full per-key RGB backlighting, while others only have limited color zones.

Finally, some Razer models have higher resolution 2k displays, while most stick to the standard 1920 x 1080 resolution.

Any of the models in our top picks will offer very satisfying performance, but you can find some that have higher end CPUs than others.

The bottom line with a Razer model is to never accept anything with less than 16GB of RAM due to the very high price tags.

In most cases, we recommend going with the i7-8750 CPU for the best overall performance, although some models can get away with lower end processors due to their extremely powerful graphics cards.

The battery will always the weak link on a portable gaming machine, but you can find some Razer models with better life than others.

The best you can expect from a Razer laptop is 6 hours of battery life, and that will be for web browsing, rather than gaming.

When playing memory-intensive games, be prepared for battery life in the 3 – 5 hour range, no matter what model you pick.

Remember that you’ll get better performance when plugged in anyway, so in most cases we recommend always being connected to an outlet.

Razer doesn’t usually skimp on the graphical quality, but for the best possible experience we recommend carefully comparing the GPUs available between models.

All other specs being equal, the GPU is where you want to get the best performance if you are buying a gaming rig. Right now, you shouldn’t be willing to pick anything with less than a GTX 1060.

For the best graphics, we recommend going with the GTX 1070 instead, however. Note that Razer is also now selling models with the newer RTX line of cards, which offers some future proofing