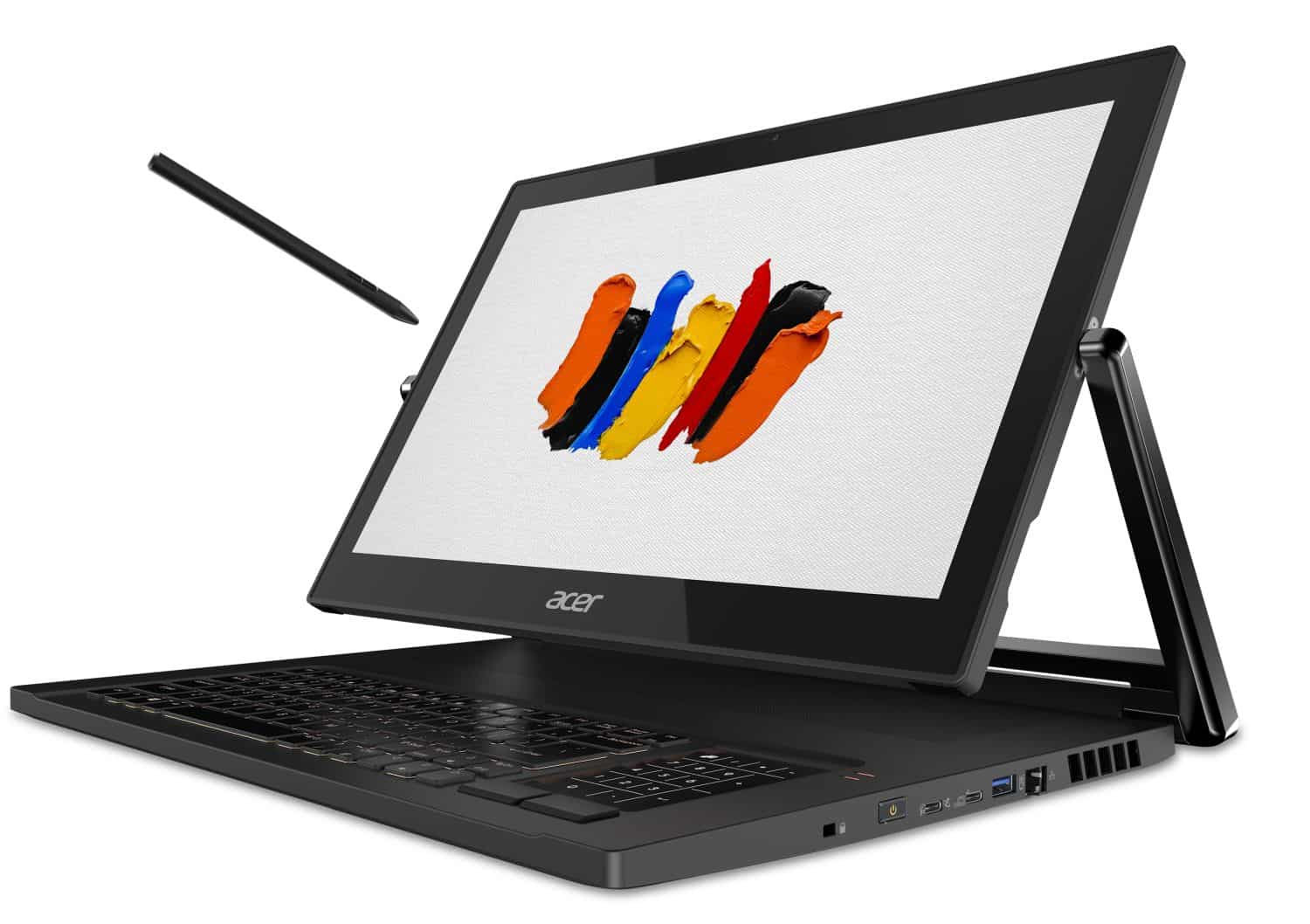 Acer is currently one of the biggest laptop brands on the market. A lot of people like Acer thanks to its enormous selection of laptop models. They have budget laptops for the starving college student as well as expensive premium laptops for people who want to show off their wealth. Acer.

But is this all that there’s to it?  Value and selection alone won’t make a good brand. So what exactly makes Acer laptop an amazing brand? Well we’re here to find out. So let’s start with figuring out where Acer computers come from.

Acer laptops computers are made by Acer incorporated. A multinational electronics and IT company.The company was founded by Stan Shih along with his wife and friends and they called it Multitech then.

Multitech wasn’t into the business or creating computers but instead it focused on creating semiconductors and other electronic parts. Eventually the company grew big enough to be able to create its own PC and renamed itself Acer in 1987.

Is Acer Good for Gaming?

Yes and No. It’s a no if you use Acer’s budget and mid-range laptops. These laptops often have decent hardware but it isn’t good enough to run most high-end games. Acer’s  gaming laptops on the other hand, is a different story.

Acer is known for its monstrous gaming laptops that have amazing specs. It also has a name that matches its cool looking design, “The Acer Predator”. The beasts of a machine run games smoothly and allow for overclocking if you want that extra boost in performance. It’s also designed for immersion as well, with its extra large screens and vibrant resolutions as well as speakers that fill your ears with sounds from another world.

So it’s a yes, if you have an Acer Predator.

A lot of users give high scores to Acer laptops. Reviews often mention how people love their affordability and their warranty. They also mention that their customer service is amazing most of the time. A good example of the Acer Chromebook 11 C740-C4PE, a fine gadget that costs about $129.99.

Customers who buy Acer’s gaming laptops have a lot of good things to say.  Gamers express the joy in their gaming laptops since they have amazing specs as well as a mean-looking design that means business.  People also say that the majority of their premium gaming laptops are durable like the Acer Aspire VX 15, allowing them to last for a long time.

Acer is definitely a highly rated laptop brand but it could do better.  Its success stems from its value and selection but sadly its enormous variety is sometimes a crutch for it from getting a high score. A lot of users like Acer’s premium laptops as well as their affordable budget laptops.

The majority of Acer’s laptops are good if not exceptional. However, some of Acer’s laptops are outright horrible and they bring the brand down. Acer is stretching themselves too thin with the number of laptop models they create. They should stop and focus on improving the ones that are truly loved by their user base.

Acer is a mixed bag when it comes to design. This comes from their mixed model quality since most of their lower end laptops look like plastic toys which doesn’t give them a good score on their design.

On the other hand, their premium laptops have world class designs that make them look slick, cool, and professional. A good example of this is the Acer Swift 5, a high-end business laptop that focuses on keeping its user productivity throughout the day. The laptop is best known for its ultra-thin and lightweight design making it very portable and easy to carry around. It only weighs 2.20 pounds despite having a 15.6 inch screen.

Acer’s gaming laptops are no joke either. They have this aesthetically unique design that makes them look like armor ready for battle. You can see it from the Acer Nitro 5’s design with its red and black color scheme and its slightly slanted edges.  It suits the name “Predator”.

Acer gets a passing score of 22/30 for its design. It has tons of quality designs for its laptops, sadly a lot of their other laptops bring the overall score down.

Acer is known for its fast and reliable customer support team. The company has been focusing more and more on their phone customer system in order to answer the hundreds of queries that they receive throughout the day.

Acer has tons of replaceable parts to spare especially because most of these parts are for their low to mid-end laptops that won’t last very long. Thankfully the parts are very cheap and they’re mostly available from the get-go.

Sadly most of these problems are caused by the software of Acer itself since most of their low-end laptops contain bloatware which severely cripples its OS as time goes on.Thankfully most Acer laptops come with a one year warranty and you can extend this warranty up to three years provided that you pay an additional fee.

Overall, Acer has a good support team that knows what they’re doing and are very professional and courteous when it comes to their job. They also have a very solid warranty that can last for years.  Acer gets a decent score of 26/30 when it comes to customer support and warranties.

Acer has been making a lot of strides in innovating their gaming laptops lately with new and convenient features. Like the Predator Triton 900 with its 2X Aeroblade 3D Fans allowing for an advanced and more efficient method of cooling down the laptop.

Speaking of cooling, Acer puts into practice its first fanless 2 in 1 laptop, the  Acer Switch 7 Black Edition. The laptop uses an advanced cooling method called LiquidLoop. It is a futuristic cooling method that doesn’t require cooling fans. Instead, it uses the condensation and evaporation of the liquid present in the loop to dramatically cool down the laptop. With this technology in mind, you can say goodbye to noisy laptop fans and dust accumulation.

One of the biggest complaints about gaming laptops, in general, is the noisy fans. If Acer is able to implement LiquidLoop on their future gaming laptops, then they will be at the top of their game.

With all of this in mind, Acer gets a 8/10 score for its innovations.

Acer probably has one of the best selections out of all the brands. They have cheap laptops that do moderately well to high-end gaming laptops like its Acer Predator Helios 300 which are suited for hardcore gamers. Acer simply has a good value and selection of laptops.

What’s truly great about Acer is the price. Even poor people and college students in debt can buy Acer laptops with ease. One of their cheapest yet highly rated products is the Acer C720-2844 being sold at just $159.99, this laptop is worth taking a look at. It has 4 GB of RAM with a fairly decent Intel Celeron 2955U Dual-Core 1.4GHz processor. The only problem is its storage which is only as big as 16GB. But with a price of $159.99, this laptop is a bargain for students who desperately need to work on their schoolwork.

Acer also has mid-range laptops like the Acer Aspire 5 Slim Laptop, it’s a lightweight and portable laptop weighing about 3.97 pounds. The Acer Aspire 5 Slim has a premium look to it despite being only sold at $349.99. Other features include a backlit keyboard, a powerful AMD Ryzen 3 3200u, and a 15.6 screen that maximizes its display, making it good for watching movies and series in general. It’s definitely one of the best Acer laptops under $500.

Asides from the Acer Aspire  5 Slim, you might want to consider looking at the Acer TravelMate P6. It’s a more business-oriented laptop with a higher price but better specs than the Acer Aspire 5 Slim. Being very slim and easy to carry, the Travelmate P6 is a good business laptop to carry around when traveling all around the world. It was built with durability in mind, enabling it to withstand shocks, rain, and being dropped. Lastly, it has a powerful battery life of up to 12 hours making sure that you can work for the day even without a socket nearby.

Acer has even delved into convertible laptops. One of the more prominent convertibles that Acer has is the Acer Spin 3. 14 inches of pure power and convenience. It’s a premium laptop costing about  $799.99 but the price is worth its specs. Powered by an 8th Generation Intel Core i7 8565U Processor and a 16GB DDR4 Memory, this convertible laptop will allow you to run most high-end software smoothly. It comes with a rechargeable stylus allowing it to be perfect for creative artists. And with a 12-hour battery life, you can draw all day long with this convertible laptop in hand.

Last but not least, Acer is known for their premium gaming laptops. As mentioned before, the Acer Predator Helios 300 is a beast of a gaming laptop suited for hardcore gamers. The laptops are powered by a 9th Generation Intel Core i7-9750H 6-Core Processor and an NVIDIA GeForce GTX 1660 Ti Graphics with 6GB of virtual RAM.  Say no more to lagging or stuttering as you play games because the Acer Predator Helios 300 will allow you to play competitively and to the best of your ability.

In summary, Acer has almost every type of laptop out there. From convertibles to business laptops and from cheap budget laptops to premium gaming laptops. It gets a perfect 30/30 score.

By tallying all of these scores together, Acer has a total score of 86 out of a 100. If this was a school Acer would get a letter grade of  B. It’s an amazing laptop brand with tons of value selection and innovative technologies. Sadly, the brand  still has some issues, especially from its lower-end laptops, that aren’t really that great.

9 thoughts on “are acer laptops good”