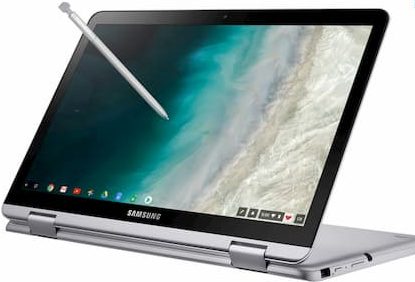 It’s a 2-in-1 laptop ideal for students, artists, and entrepreneurs on the go!

Samsung Chromebook Plus v2 (XE520QAB-K02US)
Its successors have already overshadowed it, but it's still doing well in the market. It's the proof that you can harmoniously combine the portability and flexibility of a tablet and the power of a laptop.
CHECK PRICE

It is a graphics tablet in laptop form combined with the power of Chrome OS. You can do everything with a desktop, laptop, tablet, and smartphone with this device because of its decent specs.

More powerful versions of this Chromebook are available from Samsung. The main reasons you might consider this instead of the newer Samsung Chromebooks are its price and graphics tablet capabilities.

Choosing the Samsung Chromebook Plus v2 is an intelligent compromise. Getting one lets you have a graphics tablet and a laptop in one device without having to spend more than a thousand bucks to get both separately and another hundred dollars for an operating system.

It’s very convenient to have if you work in the design industry. And it’s a perfect gift for kids and teens who want to dabble and enrich their artistic sense and talent.

Of course, other brands also offer a similar device like this, so the question now is, why should you choose this one over the others? We’re here to help you figure that out. If you want to check out other Chromebooks, you can also view our best Chromebooks review article.

A high-end graphics tablet costs around $300. Other off-brand tablets can fetch for $150 to $250. The Samsung Chromebook Plus v2 may not be as powerful and precise, but it can get the job done.

Unlike other graphics tablets, there’s no need to replace a battery, charge, or keep the pen connected to your device. The screen is pressure sensitive (with 4,096 levels), and it can detect tilt.

The nib and screen go well together. Writing on the screen doesn’t feel you’re writing on top of a glass pane. And it doesn’t give you the feeling that you’re damaging the screen with the pen’s nib.

It might feel a bit awkward at first since the EMR pen is slim. But you’ll get used to it fast. Also, it has a dedicated slot on the right side of the Chromebook where you can store the stylus. That way, you won’t lose it, and you can be sure that it’ll always be with your device wherever you go. And the fun part is that it comes with no extra cost, unlike other notebooks in the market (we’re looking at you, Microsoft).

From laptop to tablet to sketchbook and more

It’s lightweight and portable. Using it as a tablet is a bit bulky, but it’s just the right size as a laptop. It has built-in cameras that can allow you to take photos of your materials and take a video of your lectures. It is one of the best laptops for college.

And since you can swivel the monitor 180 degrees, you can use it as a presentation device. And thanks to Chromecast, you can easily use any large television or wireless projectors as your screen.

When in your class, you have multiple options to choose from if you want to take notes. You can either record audio, video, or just take a snapshot of the board. If you’re going to write, you can just flip the Chromebook screen side up, and you can use the pen to write down your notes.

Sure, you won’t get your usual Windows desktop, use Mac’s Finder, and all the other features of those two popular computer operating systems. Instead, you can use the overflowing number of Android applications in Google’s Play Store.

It’s the most significant advantage Chrome OS can offer. And you should know that most of these applications are free! You don’t even have to buy Microsoft Office. You can just use Google Suite.

And for those who’re advanced computer users, you have the option to use Linux applications in Chrome OS. A bit tweaking is all you need!

At a glance, this Samsung Chromebook looks like your typical netbook made around 2010. It has rounded edges, and the whole thing is springy thanks to the usage of flexible plastic as its shell.

Color-wise, Samsung had gone for the powdered aluminum look. The surface is soft to touch, and compared to the typical netbook, it feels a bit heavier, particularly the screen.

About the keyboard, it’s sad to say that it doesn’t have a backlight. And when it comes to connectivity, it has two USB Type-C and one USB Type-A slots. It also has a micro SD reader slot.

It also has two cameras. One is on the screen, and another one is on the keyboard deck. The quality of the photos and videos they take is decent, clear, and sharp.

The quality of the speakers is good as well. And we’re pretty sure that the main reason they sound warm and rounded is that the manufacturer positioned them to face downwards.

Lastly, its battery life is commendable, which allows you to maximize the use of your Chrome OS. Continuous regular use of this Chromebook can net you at least seven to ten hours with a full charge. With extensive use, a fully charged battery can last for 4.5 hours.

Your Chrome OS experience is simple, secure, and fast.

It’s a bit pricier than other Chromebooks available in the market. However, the price is worth it because of the improved specs and performance.

The Samsung Chromebook Plus v2 has a handy secondary camera and a much more powerful CPU than its predecessor. This fact adds more value to this Chromebook. The 2-in-1 setup and the addition of a built-in pen make it more versatile and useful than your typical low-end clamshell Chromebook. Samsung’s Chromebook Plus V2 might be pricier than your average Chromebook, but the design and improved performance over the last-gen model lets you do more with Chrome OS and Android than lower-end options.

An intriguing option among premium Chrome OS convertibles, the Samsung Chromebook Plus V2, offers unique features like a built-in stylus and two cameras. That said, $599 for our test unit is a bit dear, and we recently tested a competitive alternative. For people who have constant access to reliable Wi-Fi and plan to use their Chromebook mostly in tablet mode, the Editors’ Choice HP Chromebook x2 offers better performance and many of the same features for the same price.

It’s a relatively inexpensive solution if you want to have a graphics tablet and a laptop. It’s also one of the newest Chromebooks from Samsung. You can check other laptops from Samsung from our best Samsung laptops page.

Compared to run off the mill laptops with small screens, the Chromebook Plus v2 has a max screen resolution of 1900 x 1200, making it full HD. You can rest assured that you won’t experience the eye-straining 1366 x 786 screen resolution.

And its cameras are powerful as well with high precision when it comes to their auto-focus function.

It’s also relatively cheaper than other robust models like Microsoft’s Surface Pro, which has similar specs. The significant difference is that Surface Pro uses a 128GB PCIe SSD. We can confidently say that this still ranks well in our best laptop under 1,000 dollars review.

And if you’re a casual mobile gamer, you’ll appreciate the larger screen and the extended battery life of the Samsung Chromebook Plus v2. It’s better than most smartphones on the market. You also get the ability to multitask like browsing the net while playing because of its powerful processor, keyboard, and ability to connect a mouse.

As mentioned before, getting the Samsung Chromebook Plus v2 is a compromise. As it needs to function as a graphics tablet and laptop, it needs to sacrifice a few things.

For example, it’s too thick and heavy compared to your average Apple iPad as a tablet. As a laptop, its screen is too small, and its keyboard is not as comfortable enough because of the space limitation. The newer Samsung Chromebook has already remediated those two limitations.

Lastly, considering that many new Chromebooks have already surpassed this one in terms of specs and performance, it’s difficult to choose this because it begs a lot of cash. It’s 20% more expensive than regular laptops with the same components and no noticeable change in its price for the st few years.

The Samsung Plus v2 isn’t the sole Chromebook in the market today. You can check out the others we highly recommend:

Samsung Chromebook Plus v2 (XE520QAB-K02US)
Its successors have already overshadowed it, but it's still doing well in the market. It's the proof that you can harmoniously combine the portability and flexibility of a tablet and the power of a laptop.
CHECK PRICE