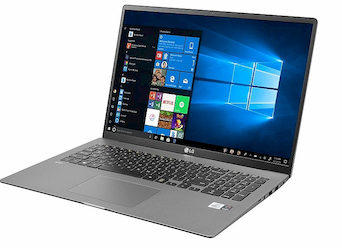 How much power can you draw from a single gram? A lot!

LG Gram
This holds the world record of being the lightest 17-inch laptop in the world. It achieved the feat without sacrificing performance, and it is a lot of more powerful than most devices in the market.
CHECK PRICE

The LG Gram is the most portable computer that you can bring around in any part of the world. And if you think the screen and the laptop itself is too big to carry around, you can opt for its smaller brothers, the 15.6-inch or the 14-inch.

It cost a premium. But if you consider how much a MacBook Pro has the same specs, the Gram’s weight outweighs this con.

We’re sure that at this point, you’re tired of bringing around much stuff when you’re doing work from places to places. You got your toiletries, extra clothing, business paraphernalia, and the essential thing in your business, your trusty laptop.

Be honest: there were times that you wanted to throw your laptop just because your shoulders’ been killing you all day carrying all of that stuff, right? It’s not a bad idea. Why not replace it with something lighter? And we do mean light.

Today, we’re going to review the world’s lightest 17-inch laptop. It’s from LG, and they have already been spending years to perfect this product. They are confident that in this 2020 rendition of their famed Gram series, they have struck gold. And it’s no wonder it’s one of the best ultrabooks out there.

It’s one of the lightest laptops in the market today. It upholds its name, Gram. But if we’re to be precise, it weighs around 1,351 grams (2.98 lbs). The average weight of a 17-inch laptop is about 5 lbs. It’s as heavy as the 13″ MacBook pro. You can even spin it around on a fingertip. It isn’t rigid, and it does flex a bit.

LG gram delivers big-time convenience on the go, on the road, in the air, and everywhere in between.

It may not weigh much, and it’s not thick, but it’s still a bit difficult to lug around. It would help if you had a dedicated bag for this since it won’t fit inside your typical backpack. Not to mention that carrying it on your back inside a bag is a bit nerve-wracking since it will feel like it will break anytime you suddenly twist your body.

That sounded too negative, right? But worry not. Those are just knee jerk reactions once you see the Gram for the first time. Once you take a closer look and get to hold it yourself, you’ll be in for a surprise on how sturdy it is.

First of all, the Gram has proven how durable it is and has passed the MIL-STD-810G, a United States Military Standard test. If a device passed this test, it could survive a sudden shock, vibration, salt fog, dust, low pressure, low temp, and high temp without taking damage or reduction in operating performance.

LG advertises the Gram and talks about this test a lot. It is, after all, its secondary selling point. There’s no sense in taking something light with you if it’s as fragile as glass.

Without overclocking, the Intel i7 1065G7 is as powerful as AMD’s Ryzen 7 2700x. If that comparison doesn’t make sense, think of this laptop’s processor like a CPU that many gamers would wish to have in their computers. With a CPU this powerful, you can do 3D rendering and 4k video editing smoothly.

Of course, since it’s on a laptop, performance tweaks are done to make sure it suits its purpose for a mobile environment. To save battery and prevent generating too much heat, LG tailored this CPU to use lower amounts of power than usual. And even with that tweak, it can still outperform its peers and do CPU intensive tasks like video rendering as if it’s the most normal thing to do in a battery-powered laptop.

If you want to look at another laptop that uses an Intel i7, check out our best i7 laptop page.

The laptop comes equipped with Intel’s Iris Plus G4 as its internal graphics because of its processor. It’s as powerful as Nvidia’s old GT730 graphics card. It’s decent enough to play low-end modern games and games that rely more on CPU than GPU like DotA 2. And a quick note: even under stress, fan noise, even at max RPM, is almost inaudible.

In case you want to use this as a gaming laptop, all you need to do is connect an external graphics card through the Thunderbolt 3 port. You don’t need to do anything else, and it’s quite convenient if you ask us.

It’s fascinating to see the internals of this laptop. Unlike old notebooks with complicated casings, PCBs, ribbons, and wirings, the Gram’s guts only have one sizable PCB plate (of course, there is other small stuff embedded on it), and a solid rectangular pack of 80Wh battery.

Given that this laptop contains power-hungry components, it demands a high power and capacity battery. And LG complied. The Gram can operate up to 17 hours nonstop when doing regular operations like browsing the Internet and office work. On the other hand, if you play a game, render, or any high workload task nonstop, it will magnificently keep running for six hours before its battery runs empty.

In the previous iterations of the Gram, people had been disappointed with the lack of a Thunderbolt 3 port. You might be unfamiliar with it, and we keep on mentioning it for quite a while now, yeah?

You see, Thunderbolt 3 is the future of universal ports and connections. It’s a multipurpose USB Type-C (USB-C). Imagine a port in your computer that you can connect your printer, camera, external video card, charger, mass storage device, HDMI, and ethernet cable: That’s Thunderbolt 3.

With Thunderbolt™ 3, you can charge, transfer, and display all at the same time. It can transfer data up to 40 Gbps and display a smooth 5K video, all while charging your laptop. It’s total versatility in one port.

With this inclusion, the Gram becomes a more versatile device to connect almost everything through a single cable and port.

It’s a lightweight and powerful device that you can get in exchange for a month’s worth of salary. You already get the point that this is one of the best 17-inch laptops on the market today. But the Gram still has a few small things to offer. And we’re going to cover all of that here.

First, for regular users, the 16GB RAM is overkill, but still really nice to have. For heavy users like gamers and renderers, 16GB is more of a standard. And we’re sure that the massive chunk of this laptop’s price goes into the cost of its SSDs (Solid State Drives). Know that you’ll get a whopping 1TB of storage space with this baby. Once you experience an SSD’s responsiveness, you’ll become allergic to HDDs (Hard Disk Drives).

About its keyboard, the Gram has a number keypad. The typical keys that often get reduced to smaller bits, like shift and backspace keys, are full. There’s a lot of potential keyboard real estate, but LG didn’t use it for the sake of having standard-sized keys and layout. Nonetheless, it has a better design than the previous versions of the Gram, which turned off many reviewers before.

The keys are a bit soft, and it isn’t as springy as your typical laptop keys, which can be up your alley or not. When it comes to the trackpad, it is tall and wide, and it’s easy to use thanks to Windows’ precision drivers.

The monitor is WQXGA (Wide Quad Extended Graphics Array). It’s almost two times as dense as FHD (Full High Definition). That translates to having more luxuriant colors and an aspect ratio of 16:10. It offers more vertical space than your regular laptop monitors, which is a plus for people who use programs with tight workspaces.

It uses the modern Wi-Fi 6 (802.11ax) technology that is slowly becoming a standard in smart devices and laptops. In terms of wired Internet connections, you’ll need to use the adapter that comes with this laptop to connect it to your regular RJ45 ethernet cable.

A few design improvements to the LG Gram 17 make the world’s lightest 17-inch laptop an excellent choice for frequent travelers who need all the screen real estate they can get.

LG’s Gram 17 remains an astonishingly lightweight 17-inch laptop, but there are some tradeoffs you’ll need to consider.

The LG Gram 17, with its big, beautiful display and super lightweight design, is excellent for anyone that has to work on the go. However, the lackluster CPU performance and bottom-firing speakers may prevent it from being perfect for some folks.

You don’t need much thinking to convince yourself that you need to get the Gram. A MacBook Pro that has the same components inside costs and weighs 75% more than this. Meanwhile, it costs 10%-20% more than its peers, spec-wise, which also weighs twice more.

We can think of why you shouldn’t buy this because you don’t have the budget to get this. It’s not that you can’t, but it’s just something you don’t need. It’s a powerful laptop, and it can perform beyond what casual users require.

You don’t need a laptop that can render 4k videos if all you want to do is browse the Internet, watch videos, generate reports, and take notes in uni. A $500 to $700 mid-range laptop or one of the best laptops for college students can do all of that for you without you breaking the bank.

LG Gram
This holds the world record of being the lightest 17-inch laptop in the world. It achieved the feat without sacrificing performance, and it is a lot of more powerful than most devices in the market.
CHECK PRICE

We might not have mentioned this much, but this laptop is excellent for photo editing. If that is your thing and if you want to see more options, you can check our best laptops for a photo editing page!