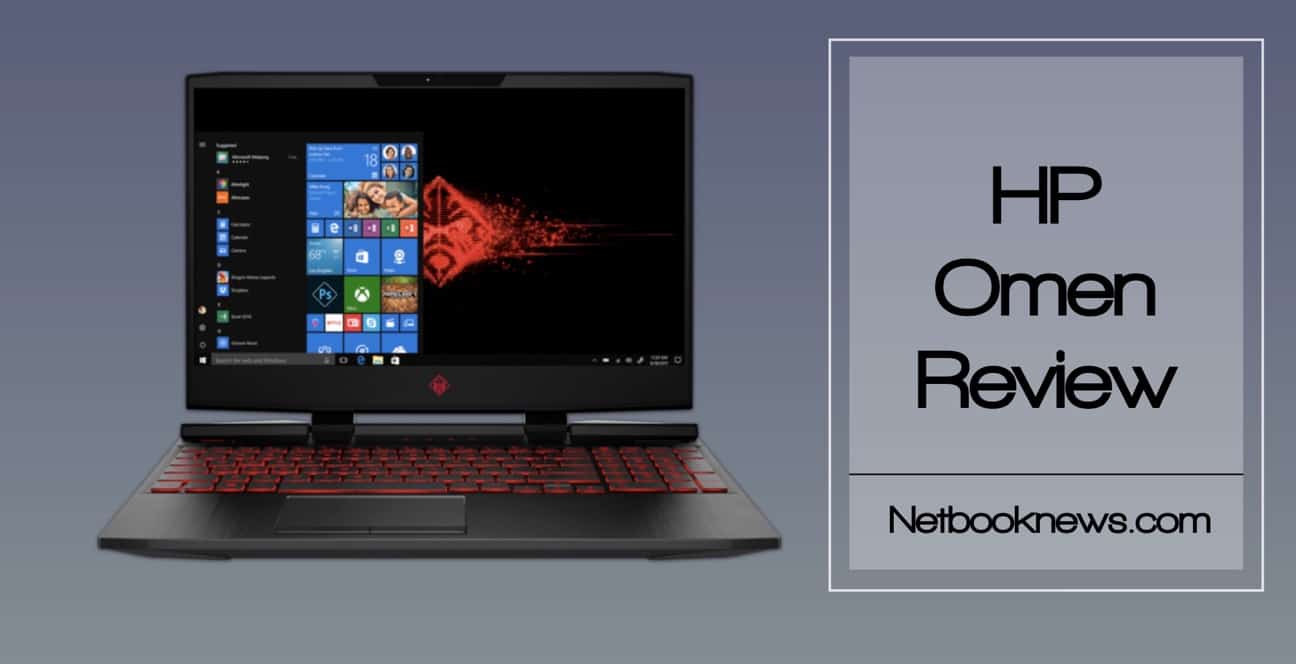 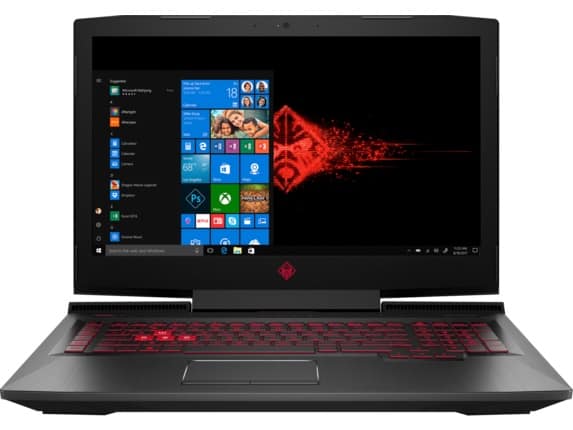 With a future proofed, top-of-the-line CPU and an excellent all around graphics card, the Omen fits the bill for a high end portable gaming choice that won’t completely empty your bank account.

You get plenty of gaming aesthetics and cool keyboard lighting options in a sturdy, solid design that’s built to last. In short, if your budget is between $1,000 and $1,500, the Omen is an excellent pick.

PC gaming can be very a very expensive hobby, especially for players who want to go mobile and pick up a worthwhile gaming laptop.

With a huge range of budget and high end machines out there from a variety of manufacturers, it can be difficult to know what machines are worth your time and which should be avoided.

From business names like HP and Dell to dedicated gaming companies such as MSI, the number of options can be truly baffling.

If you’ve spent any time researching gaming laptops, you’ve probably noticed the distinctive red and black HP Omen is listed as the official computer of the Overwatch League. With an endorsement like that it’s hard to ignore this model while looking for a new portable device.

After having spent several weeks with the Omen, we are ready to make a final assessment on whether it lives up that the hype and clearly explain who will be best served with this unit — as well as who should look elsewhere.

In terms of the raw power needed for a full desktop replacement, the HP Omen absolutely provides a top-notch experience. There’s no question this is a high end device in terms of specs and design, but it won’t bankrupt you like some of the gaming rigs out there.

..the biggest selling point here is the i7-8750H CPU, which is simply top notch!

If performance matters to you more than flashy design, then the biggest selling point here is the i7-8750H CPU, which is simply top notch.

Combined with the solid state drive and 16GB RAM configuration, you can expect instant boot up, extremely fast Windows updates, and quick game installation. You won’t find any programs where you experience stuttering, lags, or dropped frame rates.

As with many newer laptop models there’s no optical drive included here. That means downloading games via sources like Steam / GOG / Epic, or you’ll need to pick up an external USB drive to install your older disc-based games.

That latter option isn’t much of an issue, because the Omen is loaded up with ports for connecting external devices.

Specs aside, that eye-catching gaming aesthetic many buyers crave is readily apparent with the Omen, but it doesn’t go overboard.

There are a few design choices here to take into account if you are considering the Omen over other gaming-focused laptops.

While the striated design on the back stays clean, the smooth metallic finish on the lower half of the laptop near the touchpad attracts fingerprints readily, so keep a cleaning cloth handy. 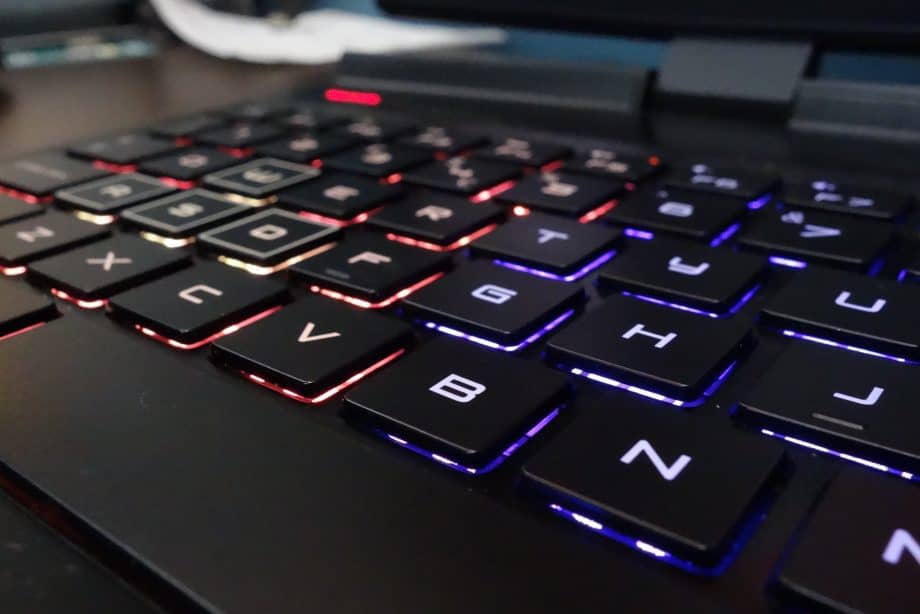 As expected with a laptop over the $1,000 range, you get a four zone backlit keyboard that can be customized to match your specific color preferences. The zones make sense for gamers, with the WASD keys getting their own segment so you can easily play in dark conditions.

There aren’t dedicated buttons for changing the lighting unfortunately, but you can manually switch colors through the HP Omen Command Center software, which does have a dedicated keyboard key.

.. you are free to pick any color and even change brightness by quadrant..

Here’s where the Omen shines, since you are free to pick any color and even change brightness by quadrant, meaning you can heavily personalize your device.

Want an all-purple light show? No problem. Prefer a red-red-red-white setup or an orange-blue-pink-green kaleidoscope of colors? Those are just as easy to create.

Unfortunately, this newer version of the Omen Command Center no longer includes fan controls, so you’ll need third party software for that if you like to tweak those settings on your own. 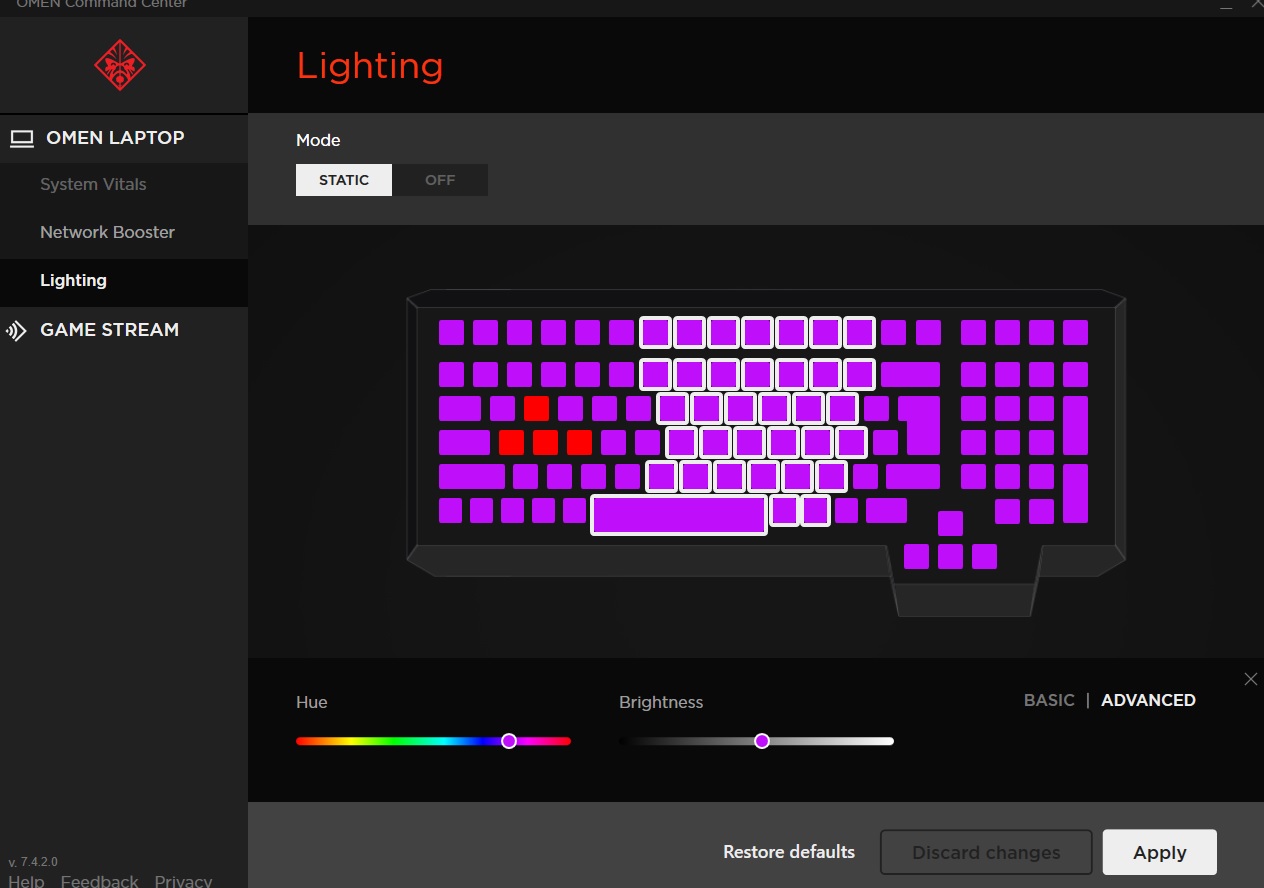 Other than the striped red and black metallic clamshell and solid mechanical keys, there’s a very sturdy design on display here. This model doesn’t feel like a flimsy plastic machine at all and there’s no flex on the screen when opening and closing like you get with budget laptops.

HP lists the Omen as using a micro-edge display, but the bezels are essentially the same normal size you’d expect from a home or office machine. You get plenty of viewing area with the 15” version, but don’t expect the barely-there bezels you get with ultrabook models.

While it looks stylish, it sounds even better — which is to say there’s almost no sound at all most of the time.

You’ll get extremely quiet operation in most instances while going about your daily tasks. Switching from a noisy desktop with an HDD to this model as your primary gaming rig is like night and day.

The only time you’ll notice any actual noise is when the fans kick in during long gaming sessions while graphics-intensive programs, but it’s still quieter than the average desktop machine. 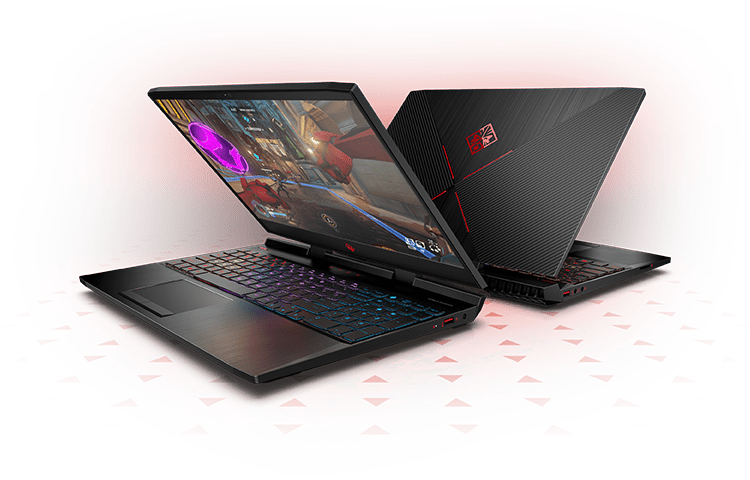 Stylish design and low fan noise are just window dressing though — so what about the heat output? That can be a major deal breaker with high end gaming rigs, which tend to get extremely hot.

HP’s CoolSense feature monitors the temp when the laptop is stationary so it doesn’t get too heated on the bottom. That being said, this model does still get quite hot around the backward facing vents.

The hot airflow will likely be aimed straight at your knees if you are sitting on a couch while playing your favorite MMO or Battle Royale title. There’s no question you’ll want to get a plastic lapdesk if you intend to actually set the Omen on your lap and not place it on a solid surface like a table or full desk.

As a middle-of-the-road model in terms of size and weight, the Omen is fairly comfortable to use on your lap but you probably wouldn’t want to carry it around all day.

This version of the Omen weighs in at 5 and a half pounds and is slightly over an inch thick when closed, so it’s not a huge gaming monster but also not an ultrabook by any means.

What’s much more impressive than the mid-range sizing is the speaker quality, which is a feature that’s often overlooked in laptops.

..when the volume is turned up even to 50% you can easily use this as a streaming device so everyone in the room can hear ..

When the volume is turned up even to 50% you can easily use this as a streaming device so everyone in the room can hear a YouTube clip or Netflix show. If you don’t like headphones and prefer to stream Spotify or iTunes at louder volumes, this is a great choice.

As a 15 incher, HP comfortably placed the full 10 key keyboard on this chassis (with none of those condensed arrow keys), which is a plus if you are used to a normal desktop setup. This model also features the standard power button placement above the keyboard, so you won’t accidentally turn your machine off while typing.

The power port itself is located on the right side and uses the standard right angle cable. Some users don’t care for that design, but frankly with how the exhaust ports are positioned it just wouldn’t work to have the port on the back.

As with many high end gaming rigs, it’s important to note that overall performance is throttled when the Omen isn’t plugged in. In other words, if you are playing graphically demanding new AAA titles, you will always want to be near a wall outlet.

Otherwise, you can expect between 2 – 3 hours of battery life when gaming unplugged. When used as a work machine for emailing, typing up documents, or streaming video, you can expect in the range of 4 – 5 hours of unplugged operation.

That’s probably the one weak link in this system, but limited battery life is something that just has to be dealt with when using more advanced graphics cards with plenty of RAM and a fast CPU.

The bottom line is that the Omen is a great way to get into a VR ready gaming machine if you don’t want to drop $2,000+ on a high end MSI model and don’t have to be away from an outlet at all times.

While it lacks a few features of the more expensive laptops and doesn’t have the most powerful GPU available, this model will easily run any current game on high to ultra settings at stable frame rates.

The Omen comes in two different configurations — one with the GTX 1060 and 16GB of RAM, the other with the 1070 and 32GB. Budget conscious buyers will be better served picking that first option, since it can be upgraded later with extra RAM.

Want even more power under the hood? We don’t recommend picking up any of the RTX laptops quite yet, but if you want to more future proofing you could move up to the GTX 1070 Omen model with 32GB of RAM.

There’s a big caveat here — that version of the Omen is actually a Max-Q 1070, so you don’t actually gain much on the graphics card side over the 1060 edition. The main difference instead is in doubling the memory.

For videophiles, there is one compelling reason to bump up to the higher end Omen model, however. With the 1070 Max-Q edition, you also get a 144hz screen with GSYNC.

While many users don’t need that level of visual fidelity, some gamers crave the best possible display. You really can’t get any better at this price point without bumping up to a full 4k screen and skyrocketing the price tag.