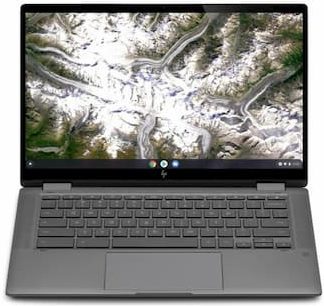 A student-friendly Chromebook that can be folded up to 360 degrees.

The HP Chromebook x360 is a convenient Chromebook that can run slightly heavier apps and programs, thanks to its latest specs and features. This Chromebook is powered by a 10th gen processor, an Intel UHD graphics card, and an FHD display for all of your viewing needs. Specs-wise it’s pretty good, it also has features that make it more convenient as well like its comfortable keyboard and 360-degree hinge which allows you to fold it at any angle that you want.

The HP Chromebook x360 is a powerful Chromebook that can do a lot of things. It’s also one of the newer Chromebooks as well which means it has a lot of updated features. However, being new and powerful comes at a price, and we meant that literally! This Chromebook isn’t exactly cheap and it costs more like a low to mid-end laptop instead which defeats the purpose of buying a Chromebook in the first place.

The HP Chromebook x360 is a powerful and reliable Chromebook that has the features that people are looking for when it comes to a high-quality Chromebook. This Chromebook was clearly made for students thanks to its portability and convenient features.

This Chromebook also has fairly amazing specs as well which is surprising for a Chromebook since it doesn’t really need that much power. But it looks like it was designed to run a lot of modern-day apps and applications allowing students to enjoy other things besides schoolwork.

The HP Chromebook x360 has a lot of worthwhile features to mention, but we really need to start with its specs because they are pretty amazing. Being a very new Chromebook, it’s understandable to have improved specs, and this Chromebook features specs similar to most low to mid-end laptops.

It has one of the latest Intel Core i3 processors which allows it to handle most modern-day apps and programs, a whopping 8 GB of RAM for all of your multitasking needs which a lot of students need nowadays since they’ll be running a lot more programs than your standard word processors, of course, the Chromebook also has a decent GPU with its Intel UHD graphics card.

This GPU is powerful enough to run basic video editing software as well as photo editing which can be used for school projects and activities.

Overall, the HP Chromebook x360 has pretty solid specs allowing you to handle most tasks that make this Chromebook more useful than its counterparts thanks to its ability to run more programs as well as run simpler programs better. You don’t need to properly optimize it like other Chromebooks but we’re sure that it will work even better if you did the right optimizations to it as well.

These slightly better specs will determine whether you have a Chromebook for editing documents or a multi-purpose Chromebook which you can use for other school projects.

Its aluminum decked keyboard is pretty comfortable to the touch and it has pretty good key travel as well. We found it comfortable to type in and you can use it for hours without having problems.

This Chromebook is 14 inches in size giving you more room to work with, the keys are properly spaced allowing you to type much more accurately especially for people with bigger hands than most.

We’ve discussed how important it is for students to take notes and that the HP Chromebook x360’s keyboard can easily handle this task. But if you aren’t that good with a keyboard, you can take notes the old-fashioned way as well, and this Chromebook will allow you to do that as well.

HP Chromebook x360 features an FHD touchscreen which means that you can use a stylus with your touchscreen to take down notes similar to how you would do it with a pen and notebook.

The touchscreen is very responsive and you can easily write down words as well. A lot of note-taking apps out there also have tons of other features that make it much easier to write compared to the analog paper and pen, so you might want to check them out especially if you want an easier time at school.

Asides from notetaking, the FHD display can also be used to destress as well. You can enjoy watching your favorite movies and TV shows after a busy day at school. The Chromebook features ultra-thin bezels that maximized its screen giving you a better view overall.

You can also play video games on it. We’ve mentioned how the Chromebook’s specs are on par with a low to a mid-end laptop so you can play some older AAA titles with it as well.

Last but not least we have the flip and fold design that it has. With a 360 degree hinge, you can adjust the Chromebook at any angle. This isn’t just cool but also convenient as well.

These are just some of the common ways to use this 360-degree hinge, some people even fold in a way similar to a book. This isn’t just for show since this actually helps you in reading large document files.

Asides from the convenience this also helps solve the problem that some Chromebooks face, and that’s the durability of the hinge. Generally, Chromebooks are built to be durable since the covers are usually made out of durable material, this is prevalent on cheaper plastic Chromebooks as well.

Despite the durable cover, a Chromebook can be easily destroyed if you move the hinge into an unexpected angle. Thankfully, you can use the HP Chromebook x360  at any angle that destroys this problem completely.

You don’t have to worry about its hinge breaking anytime soon since it’s not just durable but very flexible as well.

A strong and durable hinge will ensure that your Chromebook will last for a long time. A Chromebook with a broken hinge is almost as useful as a laptop with bad keys.

The HP Chromebook x360 is an elegant but underpowered Chromebook. The Chromebook is really classy and its FHD display and the 360-degree hinge are very appealing to the general market which makes it a good catch. It’s generally more powerful than your average Chromebook but for a device with a premium build, we wish that it performed better than it usually does.

We highly recommend that you buy the HP Chromebook x360 if you’re looking for a relatively affordable Chromebook that has above average specs and tons of cool and convenient features.

The Chromebook has this premium and classy design that’s very appealing to students. Students will also love that its specs are capable of more than just opening documents and web browsers because you can also play video games with this Chromebook.

Its slightly powerful specs also make it decent for programming as well as for basic video editing which can be useful especially if you’re studying in college.

Lastly, its 360-degree hinge just gives it more versatility as well since it can be used in many different ways. Overall, buy the HP Chromebook x360 if you are focused on being very productive without having to sacrifice your fun as well.

The HP Chromebook x360  is a good pick if you’re looking for a portable and convenient Chromebook but we do have a concern about its price. Sure it’s cheap compared to mid-end laptops but its a little more expensive than your standard Chromebook.

Performance-wise its better than most Chromebooks but then again Chromebook tend to have low-end specs. We suggest spending on a mid-end laptop if you’re just looking for something with an almost similar price but with slightly better specs.

If you aren’t too keen on buying the HP Chromebook x360  because of its price and other weaknesses, then you  might be interested in these Chromebooks:

Overall, the HP Chromebook x360 is a reliable and convenient laptop that’s very useful not only for students but for people in the workforce as well. Its might not be as cheap as the other Chromebooks but its neat features such as its 360-degree hinge make up for its price

Tell us what you think of the HP Chromebook x360 down below. Do you agree with us? We’d love to hear your opinions!