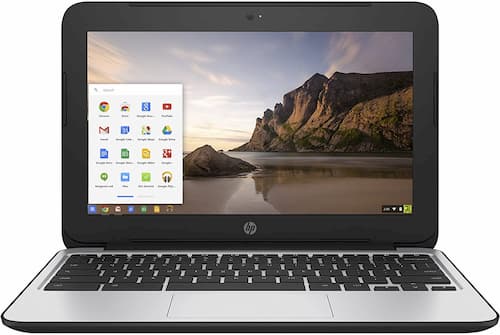 A cheap and durable Chromebook ideal for students.

The HP Chromebook 11 G4 is a cheap yet durable Chromebook that can easily fit inside a student’s bag. Thanks to its small frame and durability a student is able to carry it around easily from class to class and they don’t have to worry about losing their Chromebook from accidentally bumping their bag into objects and walls since this Chromebook has a durable design as well as thick bezels to protect the screen from impacts.

The HP Chromebook 11 G4  might be very durable and its low price makes it very appealing but it does have its faults. One of the most noticeable faults it has its screen. A lot of users have complained that they Chromebook has a washed-out screen that makes it hard to see. This makes the Chromebook harder to use which puts off a lot of people.

The HP Chromebook 11 G4  is one of the more ideal Chromebooks for students and for those on a budget. It has tons of features that make it good for school use and pair this with an affordable price that won’t leave a hole in your wallet and you got yourself a very appealing Chromebook.

Chromebooks are cheap alternatives to laptops. They may not be as powerful but their lightweight operating system helps make up for this.

Despite being a cheap laptop for students, the HP Chromebook 11 G4  went above and beyond to make itself a highly sought out choice. Students like it so much because of its durable design.

The Chromebook has a sturdy and strong plastic hinge that connects the keyboard from the monitor which prevents it from breaking when too much force is applied. Which is perfect for students who may or may not be that careful about their devices.

Asides from that, the Chromebook makes sure to protect its monitors from impact as well since its very likely for students to carry this Chromebook on a bag and accidentally bump into something.

The screen is protected from accidents since its surrounded by thick plastic bezels and rubber strips. As for the bottom, it’s also well protected since it has a compact and solid design which protects it from getting damaged if it somehow falls.

Needless to say, the HP Chromebook 11 G4 is a very tough cookie to crack which makes it perfect for younger students who may or may not appreciate the gadget they have on hand.

Being sturdy will allow the Chromebook to last for a long time but it won’t do much if you can’t use it properly. Fortunately, the HP Chromebook 11 G4’s keyboard is as durable as it is easy to use.

The keys are a little hard at first but after a few times of pressing it, they will eventually loosen up and it surprisingly has a decent key travel for a small and compact Chromebook. Having only 1.3 mm of key travel also ensures that students can type much faster however it does come at the cost of accuracy which is why we’d prefer it increased its travel key for a bit.

It is much more comfortable to type when the keys are properly spaced apart since it helps prevents typing mistakes and it could lead to bad typing posture for some people.

Thanks to its thoughtful design, you won’t have to force your hand to type in an awkward fashion and the help of the properly spaced keys prevents mistakes allowing you to type more accurately and comfortably.

Students need to take a break from studying once in a while to rest their brain muscles and to relieve stress. With the HP Chromebook 11 G4 students can destress by watching movies, TV shows, and Youtube videos.

If you don’t have earphones around it might be a big pain to listen to low-quality audio produced by your Chromebook, however, the HP Chromebook 11 G4  is different since it has pretty decent speakers for a Chromebook.

It features dual speakers that produce HD audio allowing you to enjoy your shows much better. It might not be the best speakers around but for a cheap Chromebook, it’s good enough.

Being 11 inches in size can be a big advantage especially for students who need to move quickly to get from class to class.  The HP Chromebook 11 G4 can be easily carried around thanks to its small frame allowing you to put it easily in your bag as well as grip it with your hands.

Weight-wise, it’s not very heavy as well since it weighs only about 2.82 pounds. Compared to books and school supplies, this weight is nothing!

The HP Chromebook 11 G4 is a decent Chromebook. It has a solid build, a good keyboard, and a cheap price which makes it very appealing. However, its battery life isn’t that great since other Chromebooks beat it in this aspect. It also has a dim screen which doesn’t give it a lot of points. Overall, its “adequate” enough for a Chromebook but it could be better.

The HP Chromebook 11 G4 might be the type of Chromebook you find being bought in bulk for students but its a pretty solid buy. The Chromebook has a sturdy construction and it offers relatively good performance for the price its being sold at. It might be for kids but it’s still a good Chromebook in the end.

The HP Chromebook 11 G4 is a cheap and portable laptop that offers reliable performance. It was designed mostly for use by students thanks to its comfortable keyboards as well as its durable design.

Being small also means that its very portable as well which is a big advantage to students who often find themselves burdened by carrying heavy laptops around. It might not offer the best specs but if you’re planning to use this for just school use then it can easily take notes with it and carry it from class to class.

And just like with other rugged laptops, you can expect this Chromebook to take some punishment and survive the occasional falls and drops.

Unlike other HP Laptops like the HP ProBook X360, HP Chromebook 11 G4 does not have an impressive battery life, what’s even worse is that the advertised battery life and the actual one differ by quite a bit.

Its battery life is advertised to last at least 11 hours but when we tested it out it ranges from 7 to 9 hours which is 2 hours short from its best time! And speaking of an underwhelming battery, the battery might have also affected the screen as well.

The Chromebook’s screen is very dim when compared to other Chromebooks which makes it hard to see what you’re doing which is a big no-no especially for students trying to type their notes.

So overall, if you want a Chromebook with a longer battery life a well as a better display, then we don’t recommend that you buy the HP Chromebook 11 G4.

If you aren’t too keen on buying the HP Chromebook 11 G4 because of its weaknesses, then you  might be interested in these Chromebooks:

The HP Chromebook 11 G4 may not be the most balanced Chromebook in the market and certainly has its fair share of flaws. However, it excels at what it was made to do and that’s being a Chromebook that can be used for students.

It’s very durable and its keyboard was made for typing. If you’re solely looking for a Chromebook for doing schoolwork, then the HP Chromebook 11 G4 is a suitable choice especially if you’re on a budget.

Tell us what you think of the HP Chromebook 11 G4 down on the comments below. Do you agree with us?