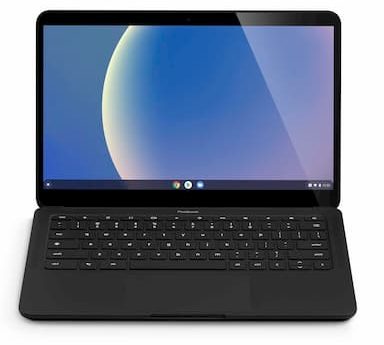 A premium Chromebook that has impressive specs and features

Google Pixelbook Go
If you’re looking for one of the fastest and most powerful Chromebooks you could use, then you’ll love the Google Pixelbook Go. It's surprisingly powerful for a Chromebook and you have its specs to thank for it with its 8th gen Intel Core i5 processor, 8 GB of RAM, and a  reliable Intel UHD 615 graphics card.
CHECK PRICE

Chromebooks are generally fast with their light operating system but the Google Pixelbook Go isn’t just fast because of Chrome OS but also because it legitimately has good specs. This Chromebook has the specs of a good mid-end laptop with its Intel Core i5 processors and a large 8 GB of RAM to use. You’ll also love to know that the Chromebook also has tons of convenient features and it’s extremely lightweight as well despite its powerful specs.

The Google Pixelbook Go is a powerful and reliable Chromebook that far exceeded our expectations. It barely has any weaknesses save for one… and that weakness is its price. This Chrome is expensive! You can probably buy 2 to 3 lower-end Chromebooks with the price that this is being sold at.  The price is at the range of a mid-end laptop which somehow defeats the purpose of buying a Chromebook in the first place.

The best Chromebooks tend to have a balance between an affordable price and reliable performance. However, there are some exceptions like the Google Pixelbook Go. This Chromebook isn’t exactly the cheapest nor the most affordable but it is one of the fastest and most powerful Chromebooks currently in the market.

And as its name implies the “go” from the Google Pixelbook Go is about getting things done and that’s exactly what will happen if you ever plan to use this Chromebook.

Having a reputation for being an extremely fast Chromebook, it’s only natural that we start with its specs. The Google Pixelbook Go features an 8th gen Intel Core i5 processor which explains why it’s so fast in the first place.

Now normally an 8th gen Intel Core i5 processor isn’t anything special and it’s usually the standard for a lot of mid-end laptops, however, those laptops are running on Windows which has tons of bloatware and unoptimized software that dramatically slows down the system.

Using an i5 processor on a Chromebook is very different and you’ll be able to easily load up tasks and programs like it were nothing. But this doesn’t stop there because the Google Pixelbook Go also has a large ram of 8 GB which essentially allows you to multitask and run multiple programs at once.

This is just the unoptimized and tweaked version of the Chromebook. Changing the settings and optimizing it yourself will boost its performance and speed even more, so performance-wise you can expect great things from the Google Pixelbook Go.

Good for Light Gaming and Editing

The Google Pixelbook Go features an Intel UHD Graphics 615 card. Although it’s not the best-integrated GPU on the market it is pretty good for a Chromebook. This video card has over 300MHz of extra power allowing you to do some light photo editing with it.  This is extremely useful if you are the creative type or the type of person who runs editing software for either work or at school.

Asides from this, you can also play some lower-end video games with this Chromebook as well. You’ll also be able to play some mid-end games as well and have decent gameplay provided that you lower the settings a bit.

The Intel UHD Graphics 615 is a low-end GPU but it’s pretty reliable for doing light graphical work. Thankfully you can get a lighter version of Photoshop on a Chromebook like Photoshop Mix and Photoshop express which allows even lower-end specs to run it well.

Despite its specs, the Google Pixelbook Go still manages to be relatively lightweight.  This Chromebook only weighs around 2.33 lbs which is pretty surprising but very convenient to know.

This makes it very ideal for traveling as you can easily carry around thanks to its weight. It’s also compact as well so you don’t have to worry about exerting a lot of effort in gripping the device while also making it easy to carry and put inside your backpack without taking a lot of space.

One of the things that we like about this laptop is that it isn’t intrusive to the other people around you. Its keyboard was designed to make as little noise as possible, in fact testing out ourselves, we barely heard anything.

Now you don’t have to worry about disturbing your seatmate while you’re working on the plane or simply disturb other people around you. Asides from this, the keyboard also has a backlight making it very ideal to use at night which is perfect if you’re at college and living with a roommate.

You can simply work uninterrupted with the lights off and not disturb anyone speaking. Asides from this, the keyboard is also very comfortable to type in as well. Not only are the keys well spaces but the keys themselves aren’t very strenuous to your fingers when you type on them.

It does have low key travel though, so keep this in mind if you prefer keyboards with high key travel.

A lot of people prefer longer key travel on their keyboard for accuracy and performance. However low key travel isn’t necessarily bad especially if you’re talking about a portable Chromebook.

The Google Pixelbook Go is a good Chromebook for businessmen and students alike. Its black magnesium-alloy lid makes it look very professional while also making it very practical as well.

The texture that the frame provides makes it easier to grip as well allowing you to easily carry the Chromebook around without worrying about slipping. This also makes it a good option for people with sweaty hands since the right texture will help accidents or accidental drops from occurring.

Last but not the least, we have the Google Pixelbook Go’s battery life. This Chromebook can last up to 12 hours on a single charge making it really convenient to have around. You can easily attend multiple business meetings or spend an entire day at school without having to worry about charging.

The Google Pixelbook Go is an amazing Chromebook that has an amazing battery life, astonishing keyboard, and reliable specs. We particularly like its “hush” keyboard that prevents it from disturbing other people around you, and it has an amazing design as well. Overall, It’s a good device with a lot of downsides which makes it a truly spectacular buy.

The Google Pixelbook Go offers solid performance and it’s pretty good for what it offers. The Chromebook has a bright and clear display followed by great battery life. It doesn’t have the best speakers but its reliable specs and comfortable keyboard more than makeup for this shortcoming.

You should buy the Google Pixelbook Go if you’re looking for a fast and reliable Chromebook that doesn’t sacrifice its other features. You’ll love that this Chromebook is relatively light despite the upgraded specs and you’ll find that its 12-hour battery life is more than enough to last you for the entire day with all those business meetings and classes that you’ll have to attend.

The Google Pixelbook Go might be a spectacular Chromebook with very few weaknesses but it’s not for everyone. For one, it packs a hefty price, and it’s almost as expensive as a mid-end laptop which is a big no-no for people on a budget.

If you don’t have much money to spare and you don’t plan to do any heavy work like programming or video editing, then you should consider a much cheaper but less powerful Chromebook.

If the Google Pixelbook Go is too expensive for you or if it doesn’t suit your tastes, then you might be interested in these Chromebooks instead:

Google Pixelbook Go
If you’re looking for one of the fastest and most powerful Chromebooks you could use, then you’ll love the Google Pixelbook Go. It's surprisingly powerful for a Chromebook and you have its specs to thank for it with its 8th gen Intel Core i5 processor, 8 GB of RAM, and a  reliable Intel UHD 615 graphics card.
CHECK PRICE

Google Pixelbook Go is a fast and powerful Chromebook that is ideal for people who want the best Chromebook experience. It might not be very cheap but it sure has a lot of features and good specs that make it a top-tier Chromebook.

Do you agree with us? Do you disagree? Feel free to comment down below and tell us what you think. We’d love to hear from you!