Perfectly ideal out of the box for the creative content creator and video editor at a reasonable price, only a few can compare. 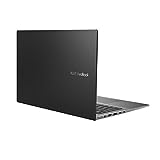 ASUS Vivobook S15 (S530UN)
A mid-range laptop that soars way higher than its peers. If your demand for a computer is high, but your budget is limited, then this is the right pick for you.
CHECK PRICE

It is a mid-range laptop that has powerful yet uncomplicated airflow and cooling setup, which makes its performance comparable with high-end laptops that experience CPU bottlenecks when they reach their max allowable temperatures. It also has nifty features such as its ErgoLift hinge that further maximize its cooling capabilities and allow the user to tilt the keyboard for a much better typing angle.

With powerful fans and more exhaust vents, you’ll hear air gush out behind the screen. Also, it has an unneeded ScreenPad, which is somewhat challenging to get used to quickly.

The S15 is a great travel companion for budget-conscious content creators on the go. It’s a mid-range laptop in terms of components, but it efficiently maximizes its CPU by having a robust cooling system. Aside from pushing its limits, its setup extends its operational life—something that most laptop manufacturers and even users ignore.

The ErgoLift hinges allow you to add some tilt on this laptop’s keyboard. We’re sure that many of you tend to adjust your old laptops’ angle by placing pads below their two upper corners or using third-party cooling pads.

Before, some manufacturers tried to address this concern by making the laptop’s base have a slope. However, design trends push this solution out of the way to achieve a flatter and thinner look. But is that enough for you to be 100% sure of buying this laptop? You can check this out our the best ASUS laptop article if this isn’t the ASUS laptop you’re looking for to buy.

It’s lightweight and as thin as the average Joe’s stack of credit cards. You can slip it inside your backpack, and you can travel with it wherever you want. You might even forget you’re carrying it.

It also has Wi-Fi 6 (802.11ax): a technology that surpasses the longstanding 802.11ac that most modern laptops and smartphones use. What does this bring to the table? It makes it easy to obtain a stable wireless connection in places full of people and other wireless devices.

It also gives your laptop a better throughput (higher speeds the Internet router can allow). In a nutshell, you can now forget the hassle that is connecting to wireless connections available in hotels, train stations, universities, and libraries. You can also maximize your Wi-Fi usage in your home and avoid the need to tether yourself to the nearest available Ethernet cable.

This S15 also boasts a fast-charge feature that can turn your battery’s 0% to 60% in 50 minutes. If you’re a heavy user, that equates to an additional three hours. However, remember that physics is heartless. Any form of “fast charging” results in heat, which is a bit scary but acceptable and safe trade-off.

Consumers have given up figuring things up when it comes to names and numbers. Intel has four major CPU series: i3, i5, i7, and there’s also the uncommon i9. Everything seems simple at first. The higher the number, the better right? Not really.

Sadly, most tech companies embraced confusing naming conventions on their products. Back then, we know that Windows 98 is much better and newer than Windows 95. A little after that, we got names like XP and Vista. Then we’re back to numbers like 7, 8.1, and 10. And it’s funny that most people claim that Windows 7 is better than Windows 10–and Windows 8.1–let’s forget about 8.1.

This machine uses Intel i5-10210U as its processor, and this laptop is simply one of the best i5 laptops out there in the market. We wish to talk about Intel’s naming scheme, but you need to take our word for it that this is a mid-range processor. It can accomplish all the work that a typical heavy user is working in the graphics and video creation industry within acceptable speed and performance.

We can safely say that this is one of the best laptops for artists.

However, it can perform as fast as a laptop with a high-end processor because of its airflow setup. Temperature management has been a core issue with portable devices. Why do you ask? The reason is that you can’t mount a massive block of aluminum heatsink on a laptop and place a big fan to cool the processor down.

Processors can easily reach and exceed 212°F in seconds if there’s no cooling system in place. Left alone, it can melt your laptop. Since manufacturers are aiming for slimmer laptops, cooling became more of an issue. So, how do the manufacturers overcome this problem?

Well, what they do is they make their laptops underclock when it gets hot. It means that they slow down or downgrade the processor’s speed when they reach a specific temperature.

Fortunately, the S15 takes a while to reach that threshold since it has a more powerful cooling system. It can maintain its speed without forcing itself to underclock. That’s the reason it can compete in terms of performance against high-end laptop processors.

It also has 4GB of DDR4 RAM, which is enough for your standard office tasks and Internet browsing. The standard is 8GB nowadays, so you’ll need to add another 4GB to allow this workhorse to handle heavier loads.

Lastly, it has 512GB m.2 SSD. We can say that this offsets the 4GB RAM. An m.2 SSD will give you that extra oomph on your applications’ loading speed and smooth RAM bottlenecks. It also drastically reduces the loading time of your OS when you boot your laptop cold and shorten the time it needs to turn off when you let your laptop sleep or hibernate.

Its monitor is one of its most significant assets. Despite having a monitor frame for a 14-inch display, ASUS fitted its 15.6-inch Full HD NanoEdge bezel display in it. Because of that and the monitor’s thinness, they were able to shave off a few pounds off its weight and make it one of the smallest laptops with 15-inch displays.

Another advantage of ASUS’s NanoEdge display tech is its clear, anti-glare, matte coating. Also, it has a wide viewing angle, which is around 178°. It means that you can view the display even if the monitor isn’t facing you directly, and more than three people sitting side by side three to five away from the monitor can still watch movies or clips on this laptop with no problems.

Those reasons easily make this one of the best 15-inch laptops that ASUS has.

This laptop comes in four colors: Indie Black, Dream White, Resolute Red, and Gaia Green. The monitor’s frame is made of metal, while the rest of the laptop’s body uses sturdy plastic material.

The laptop’s edges are rounded, which makes it easier to open up and close down. The screen’s resolution is 1920 x 1080, meaning it can display Full HD with no problems, and it has an aspect ratio of 16:9. It’s a bit glossy, though it’s because of the anti-glare coating.

The keyboard is island-style, having Chiclet keys. The keys’ travel is around 1.4mm, which is kind of shallow for our preferences. Nonetheless, its saving grace is that it has a nice backlight, which is crucial nowadays when you’re on the go.

When it comes to ports, it has the following:

It has a 720p web camera installed just above the display. It’s underwhelming, to be honest. It’s HD, but 1080p cameras have already been all too common in smartphones and laptops. If it did have a better camera, this could easily be the number one laptop for video bloggers.

When it comes to speakers, the Harman Kardon-certified sound system speakers are mildly powerful. They can fill a medium-size room with sound. ASUS installed them face down to take advantage of the surface below the laptop to make it sound warmer and fuller and not tinny and sharp.

And of course, let’s not forget about its battery. Heavy usage will net you 4.5 hours of battery life. Alternatively, mix and regular use allow you to play with this laptop for 7.75 hours. If you want to take advantage of its fast-charging feature, conserving your battery charge will become a thing of a past.

This rating is not world-shattering. Although it is a “satisfactory” rating on most websites, you must remember that there are hardly any notebooks that get below 60%. Verbal assessments in this area often don’t sound bad, but they are often caused by euphemisms. Consider that this notebook to be below average by the testers.

Whether you choose the older model with its unique touchscreen touchpad or the newer streamlined version, the S15 is a smart pick for a moderately priced thin-and-light 15-inch laptop.

It’s not a productivity powerhouse, but it isn’t meant to be and performs plenty close to (or better than) machines that are much more expensive. If you’re just after a daily driver that functions in place of a desktop, is travel-friendly, and won’t break the bank, the VivoBook S15 is easily the best we’ve seen so far in 2020.

If you want a starter laptop for work with high computing demands on a budget, ASUS’s Vivobook S15 is right for you. It’s also a decent gaming laptop under $1,000. However, expect that you can only play low-end modern games since this doesn’t have a dedicated graphics card, and it solely relies on its CPU’s processing power.

It can pull through for the coming years and keep up with you despite not having the top of the line components. Its power comes from an intuitive and efficient design that involves lots of trade-offs—most were not deal breakers on our books.

We believe that this is the path those other laptop manufacturers should take. It should be efficient over style, and not the other way around. You shouldn’t sacrifice components and performance to satisfy your eyes.

And even if ASUS did prioritize efficiency, this laptop still looks freaking stylish. People should give tons of praise to the one that created or brought up the ErgoLift. It’s a simple design choice that’s aesthetically pleasing. Not to mention that it also helps alleviate two major laptop concerns. Kudos to you, sir.

We mentioned the trade-offs. Despite us being okay with them, we’re sure that some of you wouldn’t agree or wouldn’t turn a blind eye.

Second, the fan can become too audible when you start doing CPU intensive tasks. If you’re in a public setting, like in a café, you should expect that you’ll get some attention.

Fourth, the anti-glare coating can dull out the display, especially if there’s light hitting the screen. This protective layer might force you to use the laptop in a low light environment if you want to work on things that demand color precision.

The Samsung Plus v2 isn’t the sole Chromebook in the market today. You can check out the others we highly recommend:

ASUS Vivobook S15 (S530UN)
A mid-range laptop that soars way higher than its peers. If your demand for a computer is high, but your budget is limited, then this is the right pick for you.
CHECK PRICE

If you want other laptops to use for graphic designing, consider checking out our best laptop for video editing list!