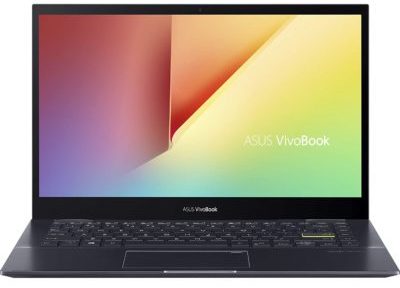 It may not be an eye-catcher, but it can flip you off your socks with its performance.

ASUS Vivobook Flip 14 (2020, TM420IA)
This is a product of a great team-up between ASUS and AMD. It has everything without you sending your money to oblivion: it's portable, powerful, and just outright cost-effective investment for your work and personal entertainment.
CHECK PRICE

It’s a 14-inch convertible with a high-end laptop’s power with the price of a mid-range one. Getting it is the most economical and smartest purchase you can pull off this year.

ASUS sacrificed a lot to deliver a lightweight and slim convertible. Some of those sacrifices are the Flip 14’s its shell durability, sturdiness, and aesthetic appeal.

ASUS is one of the prominent laptop manufacturers in the world. It’s well-known for producing long-lasting laptops, and for the past decade, it has never let people down. However, it seems that the company is reinventing itself and trying a different approach this year.

Instead of the usual solidly built machine, they’re gunning for performance and budget. ASUS is pushing toughness and style on the backside, and we believe they want to be more aggressive in competing in the mid-range laptop market. Putting ASUS aside, the Vivobook Flip 14 will surely entice you with its potential, and as far as we can say, it’s worth a look.

The Vivobook Flip 14 uses AMD’s Ryzen 7 4700U processor. If you’re not a gamer or a tech enthusiast, you might be unfamiliar with what or who AMD is—it’s understandable.

For the past few years, Intel has dominated the laptop processor market. After all, it has name recognition. When people hear Intel, they immediately think of high-end business and professional computers.

That’s not just the perception of the populace. Intel CPUs are high performing, often used in business and professional settings. They are usually low powered, have excellent temperature management, and are incredibly resilient.

On the other hand, AMD has been mostly thriving on the gaming scene, particularly in providing high-performance gaming processors. People view AMD’s CPUs as processors that maximize their performance capabilities by utilizing the maximum possible power and temperature.

Also, their processors are inexpensive! You can get an AMD processor half the price of an equivalent Intel one. It has recently entered the mobile computing scene and has been pioneering its APU (Accelerated Processing Unit) technology.

By the way, an APU is a combination of a CPU and a GPU (Graphical Processing Unit or the core component in an external video card) in one unit.

Now that you have a bit of an idea about AMD and its products, you should know that the Ryzen 7 4700U is one of the top-end mobile processors. The nearest equivalent of the 4700U is Intel’s Core i7 1065G7; it’s a heavyweight lifter in terms of processing power, and it’s primarily inside the best i7 laptops.

Unleash your creativity, knock out your next work project, or watch videos — everything’s a breeze with VivoBook Flip 14

With the Ryzen 7 processor, you can almost do everything on your laptop. It comes with an integrated seven-core Radeon graphics that can handle regular browsing to heavy rendering tasks like creating 3D movie clips smoothly and beautifully. For reference, it’s as powerful as GeForce MX250 and MX350, both dedicated graphics cards for laptops.

When buying a Vivobook Flip 14, you can opt to get one with 8GB or 16GB RAM. As early as now, we want to recommend you to get the latter. We know that it will cost more, but if you intend to get a high-end laptop, you must never skimp on RAM and storage.

Sure, 8GB should be enough for casual users who just want to browse with tons of communications, productivity, and office applications in the background. However, if you’re specifically looking at this review to get a powerful laptop, you wouldn’t want your RAM to hold back your processor’s power and the laptop’s other components.

Also, getting a 16GB is the best way to go to future proof. After all, most program developers nowadays suck. They don’t care if their applications eat lots of computer memory as long as they run. Just imagine the full desktop/laptop version of Skype can quickly eat 0.75 to 1GB of RAM. And that’s just a messaging app!

Regarding the storage capacity of this laptop, you can opt for 256GB or 512GB. And just like before, we also recommend that you shoot for 512GB or 1TB. We’re sure you’ll still be below the $1,000 mark, like these laptops’ prices,  after that upgrade.

However, you don’t need to if you think you don’t need a lot of space. Since this laptop has Thunderbolt 3, you can just get an external SSD that you can use to store your data.

ASUS has accumulated experience and customer feedback from its prior convertible releases. We believe that they learned what their target audience wants and addressed some of the critical issues in the convertible laptop/tablet market.

One of the most significant improvements in the new Vivobook is its long-lasting hinges. With the 360 ErgoLift hinges, you can rest assured that it can take some abuse whenever you “convert” this machine to a tablet, tent, or laptop.

These hinges are required to pass a 20,000 cycle test. Putting that into perspective, if you flip your laptop ten times a day (that’s a very generous number), the hinges will hold on for more than five years. Ten years if you fold the convertible only five times a day. You get the idea.

Of course, it won’t be a proper convertible if the monitor isn’t a touch screen. We might have harped on and sung more praises to this product since you can use a stylus on it, but we can’t. For some reason, ASUS decided to sell the stylus or the “ASUS Pen” separately.

Going back to the monitor, it’s a 14-inch, has an aspect ratio of 16:9, and has a resolution of Full HD. Not an ideal combination if you want to use it for work or gaming, but it’s suitable for watching movies and streams. Aside from those, it has a wide viewing angle, thanks to IPS tech.

Meanwhile, for those who hate bezels on their screens, be glad that the Flip 14 has a high body to screen ratio, which means that the laptop’s display compact and the bezels aren’t as imposing.

As a 14-inch convertible, it can be considered lightweight. It only weighs 3.31 lbs. You can carry it anywhere. And it’s comfortable to use as a tablet.

Lastly, the keyboard has a backlight. And its layout is island-style/chiclet buttons. Its keys have a travel depth of 1.4mm, which is the standard.

The versatility that flips the world on its head

The Asus VivoBook Flip 14 does a lot right for a convertible laptop, delivering top performance in its price tier. Still, its build and feature set to fall behind some less expensive alternatives.

The Asus VivoBook Flip 14 blew us away with its Herculean AMD CPU, but its battery life and dim display could be better.

A surprisingly powerful 2-in-1, the Asus Vivobook Flip 14 is an excellent multitasker with some remarkably good graphics performance for a hybrid laptop. Though the 8GB RAM slows it down a bit when working with many multimedia data or Chrome tabs, it’s more than enough for school or workplace productivity tasks.

It’s a must-buy if you want a portable and powerful 2-in-1, standing out from its convertible brethren. It uses one of the best AMD performance CPUs out on the market, and we can comfortably say that it can do your bidding whatever it is (of course, it can’t let you perform magic!).

Aside from portability, one of its other strengths is connectivity. It comes with many ports, which can let you comfortably use it with every external peripheral you have. Also, it uses the new Wi-Fi 6 tech.

You see, having Wi-Fi 6 as your wireless adapter allows you to have a very stable and fast wireless connection if in the most crowded places you’ll ever be at any time.

If you also like games, Ryzen 7 and its integrated graphics can play most modern games. Just be warned that using this as a gaming laptop can give its battery some hard time.

If you use any mobile device ruggedly, we’re afraid that this convertible may not keep up with you. The chassis flexes and bends too much. While it won’t break, you might not prefer it.

If you want a stylish device, this isn’t for you. It looks like an ordinary laptop until you may surprise people that it’s a convertible. But you might not want to risk doing that. They may look at you with pity.

Anyway, despite the NanoEdge technology ASUS is boasting about, we don’t see anything special about this laptop’s display. And to be honest, it’s a bit dim for our preference. If video editing and photo manipulation are involved in your profession, this is a no go for you.

ASUS Vivobook Flip 14 (2020, TM420IA)
This is a product of a great team-up between ASUS and AMD. It has everything without you sending your money to oblivion: it's portable, powerful, and just outright cost-effective investment for your work and personal entertainment.
CHECK PRICE

If you like it, buy it!. If you don’t, you still have a lot of options here in our fine list of the greatest business laptops in the world—in our opinion, of course!