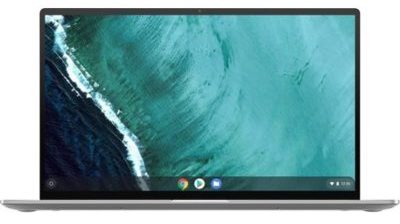 A Chromebook that offers stylish but durable design and good performance.

ASUS Chromebook Flip C436
The ASUS Chromebook Flip C436 did not only deliver on providing a more powerful 2-in-1 laptop, but it also created one that looks amazing. The device can already be mistaken for a premium Windows laptop if it weren’t for the Chrome logo, which shows that Chromebooks don’t always have to look cheap or outdated. It’s updated processor also makes it a powerful machine that can easily breeze through many activities, including a bit of multitasking. It should be considered as one of the best Chromebooks available, but its mediocre battery life and higher price tag just put it out of that contention.
CHECK PRICE

This 2-in-1 14-inch model can easily pass up for a premium Windows laptop with its sleek design. A better CPU also means this Chromebook is more than capable of handling more taxing tasks with ease.

The upgraded power comes with a cost in the form of mediocre battery life. It is also a bit pricey for a Chromebook, making this a less attractive model for many buyers.

The predecessor of the ASUS Chromebook C436 was one of the best Chromebooks available in the market. Are the added improvements and features enough to continue the trend?

This is what ASUS hopes with the Chromebook Flip C436, and at first glance, it seems they might have succeeded in producing another great Chromebook for kids and young students. It features a more powerful processor, allowing it to handle more complex tasks, including multitasking.

This 2-in-1 device also features a sleek design and a 14-inch display, making it look more like a premium Windows laptop than a Chromebook. However, the battery life is a bit of a disappointment and the improvements don’t seem to justify the higher price tag, especially if you consider there are many affordable Windows laptops out there.

A Stylish And Durable Design

Let’s look further at what the ASUS Chromebook Flip C436 has to offer.

One of the first things that we noticed about this 2-in-1 laptop is its appearance. If it weren’t for the Chrome logo seen on the upper left corner of the lid, we wouldn’t even think that this is a Chromebook.

The device uses a magnesium-alloy body with a Transparent Silver finish (the device is also available in Aerogel White). In the middle of the cover is the ASUS logo and the Chrome logo is located at the top left. The design looks stylish and makes the laptop look like a premium model.

The lid also feels durable and well-built and there’s hardly any flex when you press on it. The hinges are also sturdy and it can keep the device in place regardless if you put it on the laptop, tent, or tablet mode.

The laptop is also thin and light, having a thickness of only 0.54-inches and a weight of only 2.58 pounds. Inside the device, you will be greeted by the 14-inch full HD display with thin bezels. The small bezels and 85% screen-to-body ratio allowed ASUS to put a 14-inch display on a smaller laptop body.

This device is only the size of most 13-inch models you see today. The deck, touchpad, and keyboard are also coated with Transparent Silver, adding to the device’s stylish design.

Aside from being well-built and having a sleek design, the Chromebook Flip C436 also offers a bigger display and great features.

This 2-in-1 laptop has a good 14-inch full HD display that is bright and provides sharp images and videos. Though colors are not that vivid, the screen is still able to properly show it and provide good contrast.

It is important to remember that the 1920 x 1080 is not this device’s default resolution settings. You need to adjust it to get the full HD resolution. The keyboards are also properly placed and have just the right size.

It’s very comfortable to type, even in extended periods, with its snappy and clicky feedback. The fingerprint scanner is located at the top right of the keyboard, it’s the chrome-colored blank key which is quick and accurate. It’s a great feature that will allow you to log-in faster on the Chrome OS without issues.

The touchpad is also adequately sized and is very responsive. It also has a soft touch, so pressing it doesn’t require much force. The Chromebook Flip C436 also has four speakers with two of them built-in on the hinge while the other two are located on each side of the deck.

The sounds are decent and can fill up a small-sized room. The quality is also okay, but not the best one available. You’re better off using external speakers if you really want to experience good sounds, but if you just want a device that you can listen to music, this laptop’s speakers will do.

It has decent ports, with a USB 3.2 Type-C port on either side, an audio jack on the left, and a microSD card reader on the right. You might encounter limitations with its lack of an HDMI port and USB Type-A port, but it can be easily fixed with an external adapter.

The Chromebook Flip C436 also supports WiFi 6, which means this device can easily send and receive data quicker, resulting in faster internet speeds. The webcam is also serviceable, just don’t use it in a dim room since images or videos will be a bit dark, so make sure to use it in rooms with good lighting.

The main selling point of the ASUS Chromebook Flip C436 is that it offers more power.

The unit we tested now uses the 10th Gen Intel Core i3- 10110U with 8GB of RAM and 128GB of storage space. This is a huge upgrade over the previous generation, which used a Core m3 chip. There is even a more powerful model, using a Core i5 chip with 16GB RAM and 512GB hard drive.

The more powerful processor and better specs performed as advertised, allowing us to perform various tasks on this device easily, that previous model had trouble with. This includes multitasking, having multiple browsers open, and even playing some videos in the background.

The 2-in-1 laptop can also run Android apps, but they seem to be more hit and miss as there are apps that work perfectly and apps that usually crash. This device can properly run many of the top apps, even Lightroom, but have trouble running apps that are more demanding.

…it does beat many Chromebooks available in the market…

But between browser extensions or Android apps, you’re better off using the browser as it provides a better experience. This device’s performance won’t beat Windows laptops, but it does beat many Chromebooks available in the market right now. To keep the device cool, it features a cooling fan, that is a bit loud but does its job well.

Gaming will be doable, as long as you will only play older and not demanding titles, as it’s Intel UHD Graphics card can’t handle more demanding programs. As great as this device’s performance is in doing various tasks, it’s unfortunate that we can’t say the same for its battery life.

ASUS advertised that this device can last up to 12 hours with a single charge. But that didn’t happen, as our testing only allowed the laptop to last for about 8 hours and 40 minutes. We tested it doing various tasks and set the brightness at 50% and volume at 100%. WiFi is not activated as well, to save on some battery life, but this is the best we got.

You can probably stretch it out a bit to 9 hours by further lowering the settings. But don’t expect that this laptop will reach 12 hours. It’s not a bad result and it’s enough to get you through a day’s worth of work or school activities. But that battery life is one of the lowest, though, in the Chromebook market.

Serious Google Docs and Gmail users already know that Chromebooks can compete quite well with Windows and macOS laptops for everyday apps, if not for demanding creative or workstation tasks. The Asus Chromebook Flip C436 underscores that, offering some of the cachets of the company’s ZenBooks for considerably less money in one of the most compact 14-inch convertibles on the market. I was a little disappointed in its battery life and the lack of an HDMI port, and I might hold out for the $999 Core i5 model for a nudge of extra performance.

The strongest argument in favor of the C436 is its build; it’s impressively compact for a 14-inch convertible, and the keyboard is a standout. It looks like it could be a Zenbook, Asus’ line of premium Windows laptops. Show it to anyone who still thinks Chromebooks are cheap gags for students, and they’ll probably be convinced otherwise. That’s why I’m so disappointed by the battery life because I think it turns a Chromebook that could’ve been the best in its class to one that is just okay.

Chromebooks are not usually known for their power stylish design, but this model is changing that. It’s great features and more powerful processor allows it to do many things that other similar devices can’t. It’s the perfect laptop for students who do a lot of multitasking and have heavier workloads.

The upgrade in power comes with a cost in the form of mediocre battery life. The featured upgrades are also not enough to justify its higher price tag, especially if there are cheaper alternatives.

If you find that this Chromebook model is not the one you need, there are more options available in this market. Here are some of the ones we recommend:

ASUS Chromebook Flip C436
The ASUS Chromebook Flip C436 did not only deliver on providing a more powerful 2-in-1 laptop, but it also created one that looks amazing. The device can already be mistaken for a premium Windows laptop if it weren’t for the Chrome logo, which shows that Chromebooks don’t always have to look cheap or outdated. It’s updated processor also makes it a powerful machine that can easily breeze through many activities, including a bit of multitasking. It should be considered as one of the best Chromebooks available, but its mediocre battery life and higher price tag just put it out of that contention.
CHECK PRICE