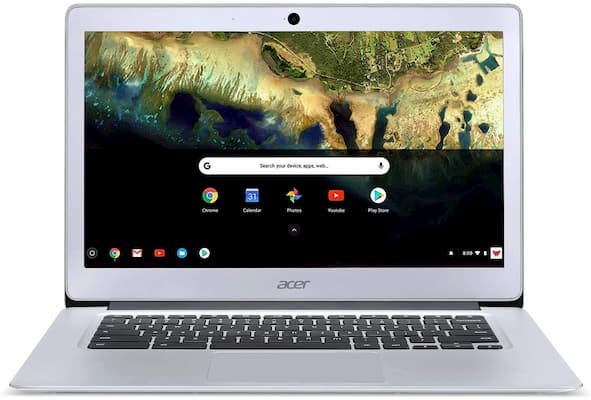 A stylish and reliable Chromebook that comes at an affordable price

Acer Chromebook 14
If you’re under a budget but still want to use classy looking Chromebook that has tons of nice features, then you’ll love the Acer Chromebook 14. Its aluminum frame beats the plastic frame compared to their Chromebooks. The frame also gives it a more durable but also more functional design. It also has tons of other features that make it worth your while as well, it’s definitely worth taking a look at especially if you’re looking for a Chromebook with a lot of value.
CHECK PRICE

The Acer Chromebook 14 is a good Chromebook for those who are on a budget. Not only is it affordable but it also has tons of features that make it worth the buy. Features like a durable metal body, an impressive battery life, and a better overall wireless connection. Needless to say, this Chromebook provides a lot of value for its affordable price.

The Acer Chromebook 14 is one of the best Chromebooks out there if you consider price and the value that it gives. This Chromebook isn’t the cheapest but it’s definitely affordable, It is a lot better specs-wise than its 11-inch counterparts and it has tons of convenient features that help set it apart from the rest.

Acer has always been known for its cheap and affordable laptops and the Acer Chromebook 14. Its affordable price makes it a very appealing choice for people especially considering that this model has tons of useful features.

Cheap products tend to provide subpar performances but the Acer Chromebook 14 is able to dish out a better performance compared to other Chromebooks in the same price range.

With the advent of 5G connections, more and more devices companies are relying on the internet to deliver their services and business. Needless to say, you’re going to need a reliable gadget to use the internet as well.

The Acer Chromebook 14 has got you covered here with its dual-band  802.11 ac  MIMO technology which enhances wireless connections allowing you to connect to the internet much better and take advantage of 5G technology.

MIMO stands for “multiple-input, multiple-output” and thankfully it will also enhance your connection to multiple devices since it will essentially allow the Acer Chromebook 14 to send multiple data at once to multiple devices that can come in handy in this busy day and age.

It’s advertised that the Acer Chromebook 14 can improve your internet connection up to 3 times. We’ve tried it for ourselves and although it is not exactly 3 times the speed, we did experience overall better wireless connections when compared to Chromebooks on the same price range.

Tons of Input and Output Devices

Modern gadgets and devices might use the internet to connect to one another but that doesn’t mean that input and output devices are completely obsolete. They can still be used to provide a stable connection between gadgets like HDMI ports and connectors.

The Acer Chromebook 14 might lack a type-C USB port but it’s still pretty connective for a Chromebook. It has 2 USB type 3.0 ports, a headphone jack, as well as an HDMI connector which is really useful for connecting to a lot of modern-day screens.

One of the best things to look out for when using the Acer Chromebook 14 is its impressive battery life. This Chromebook can last for the entire day since its battery can last up to 12 straight hours without having to charge.

This makes it a good Chromebook to use if you’re ever planning to travel or simply go somewhere where charging might not be that convenient.  It also allows you to use the Chromebook while lying down as well without having to worry about wires getting in your way.

Now, this is the advertised battery life, the actual battery life is actually much shorter than that. By testing out the battery lives ourselves, we were able to see that the Chromebook lasts an average of 9-10 hours which isn’t pretty bad.

Even if it doesn’t completely reach the advertised 12 hours, 10 hours of battery is still pretty good considering that most Chromebooks of this price range tend to have lower overall battery life than that.

Good Balance Between Portability and Power

The Chromebook is in the perfect balance between portability and power. It’s a lot more powerful than its 11-inch predecessors since it can house better hardware in its 14-inch size yet it isn’t that big and bulky that it prevents you from moving around.

The Chromebook weighs around 3.41 lbs which is pretty light considering that it’s as big as 14 inches.  And since the Chromebook has a good battery life, you can easily enjoy working and using it on coffee shops, in the middle of the park, or any other public place where charging ports may be scarce.

Last but not least is the Chromebooks durability. Most Chromebooks are made out of cheap and brittle plastic which isn’t really something that will last very long. Plastics may be strong but they aren’t the best products for gadgets especially when it comes to protecting their fragile components.

Thankfully, the Acer Chromebook 14 doesn’t have this problem since its protected by a sturdy aluminum casing that allows it to take a couple of blows before being damaged. Of course, its metal frame also looks good as well giving the Chromebook that classy and sophisticated look that most premium devices have.

Acer Chromebook 14  has everything you’ll ever need from a basic laptop. It’s powerful enough to run the most day to day applications and it has tons of features that make it worth the while. These extra features include long 12-hour battery life, a durable aluminum metal casing, as well as classy design.

The Acer Chromebook 14 is a good choice for people who are looking for a mid-end Chromebook that has tons of convenient features. This one is particularly durable and it has long battery life as well. Its a pretty decent pick considering that Chromebook of the same price range isn’t as good as this one.

Get the Acer Chromebook 14 if you are on a budget but want something close to a more-higher end pick. Among budget Chromebooks, this one is pretty high up there on the tier list.

The Acer Chromebook 14 is a good pick for a budget Chromebook but it has a lot of shortcomings as well. Specs-wise, it’s still pretty underwhelming so don’t expect it to run advanced programs and applications like video editing software.

The keyboard is also a little bit stiff making it a bit more difficult to type. This severely limits your working speed which makes it a bad work laptop as well an unideal for students who have a lot of papers to write.

Don’t buy this if you’re going to use it for work or studies because it clearly wasn’t designed for that.

If you don’t find the Acer Chromebook 14 that appealing or if you simply want a device that’s better specs-wise, then this might be good alternatives:

Acer Chromebook 14
If you’re under a budget but still want to use classy looking Chromebook that has tons of nice features, then you’ll love the Acer Chromebook 14. Its aluminum frame beats the plastic frame compared to their Chromebooks. The frame also gives it a more durable but also more functional design. It also has tons of other features that make it worth your while as well, it’s worth taking a look at especially if you’re looking for a Chromebook with a lot of value.
CHECK PRICE

Acer Chromebook 14  is an ideal Chromebook for traveling since it has an extremely long battery life and portable design. It also is more durable than most Chromebooks thanks to its metal frame that helps protect it from impacts as well as making it look more classy and reliable as well.

So what do you think of the Acer Chromebook 14? Is it good, is it bad? We’d love to know what you think in the comments down below!