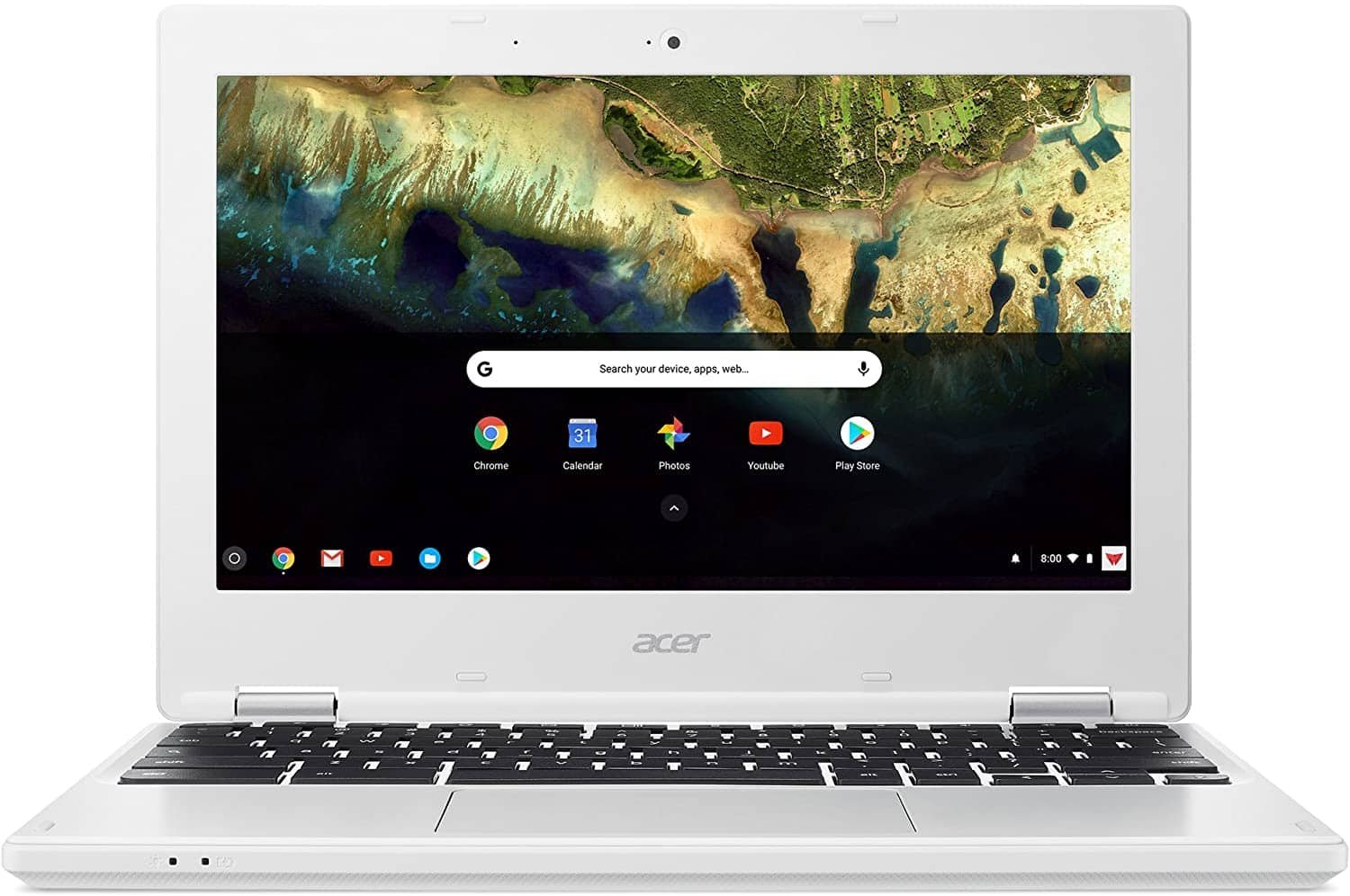 A cheap and reliable laptop that has tons of useful features!

Acer Chromebook 11
If you’re looking for a cheap and reliable laptop that happens to support Ubuntu, then the Acer Chromebook 11 is a good choice. This laptop has a decently long battery life of up to 10 hours allowing you to use it for the entire day. Asides from this, the Acer Chromebook 11 also comes with tons of interesting and unique features that provide a lot of bang for its buck like its anti-glare display, MIMO 802.11ac wireless technology, and extremely fast speed.
CHECK PRICE

The Acer Chromebook 11 is very cheap and affordable making it a good choice for students or people who don’t have a big budget. Aside from the cheap price, the laptop offers a lot of value to its users by providing you with impressive battery life, amazing wireless connection, multiple layers of security and so much more!

Despite its amazon features and relatively cheap price, the  Acer Chromebook 11 isn’t perfect and it comes with its own setbacks and faults. One of its biggest faults is its touchpad which a lot of customers have a problem with, it’s really inconsistent and not that sensitive compared to other Chromebooks, you’ll have to press your fingers firmly on the touchpad if you want the laptop to read your movements correctly.

Laptops are very handy pieces of hardware since it allows you to use them anywhere at any time provided that they have the battery life for it. The problem is that a lot of the newer laptop models are a little bit pricey and if you settle for the older but cheaper models, it lags behind in performance.

You won’t have that problem with budget Chromebooks like the Acer Chromebook 11 since they’re relatively cheap and despite not having equally powerful specs from their Windows counterpart, they can still run smoothly.

Chromebooks like the Acer Chromebook 11 and the Samsung Chromebook 3 are known for their ability to run smoothly despite having lower-end specs. This is because Chrome OS is less heavy than Windows which allows the Chromebook to run most processes with its Intel Celeron N3060 Dual-Core processor and 4 GB of RAM.

The Intel Celeron N3060 Dual-Core may not the most powerful processor out there but thanks to Chrome OS, it can keep up with laptops that have better specifications than it

Asides from a fast and responsive operating system, the Acer Chromebook 11 also fulfills your portability demands with its long battery life. This Chromebook is able to last up to 10 hours in a single session, essentially allowing you to use it for the entire day. And thanks to its lower end specs, it won’t overheat as much compared to other laptops which also prolongs the battery life as well.

Good battery life and a portable laptop is always a good combination and the Acer Chromebook 11 fulfills both requirements. It already has a long battery life as discussed above and it doesn’t lag behind when it comes to portability as well.

This Chromebook weighs only about 2.43 lbs making it extremely lightweight, pair this with its small 11-inch frame, and the  Acer Chromebook 11 can be carried around easily without causing a lot of strain compared to other laptops.

Portability won’t mean much if you can’t see the screen on a hot sunny day. This makes the device unusable when working or using your Chromebook on the beach. Fortunately for Acer Chromebook 11, this Chromebook has an anti-glare display allowing you to see the screen even when in a bright environment.

Durability is one of the major factors in choosing the best laptops out there and the Acer Chromebook 11 will ensure that you’ll be able to use it for years before having to buy a new Chromebook or laptop.

Not a lot of people know this but the ChromeOS is based on the Linux Kernel essentially making both operating systems more compatible with one another. This is why it’s easier to install Ubuntu on most Chromebooks and the Acer Chromebook 11 is no exception to this.

Feel free to use Linux  LibreOffice, Thunderbird, and other Linux apps with ease when you have a Chromebook around.

The Acer Chromebook 11 features the Mimo 802.11ac Wireless Technology which essentially enhances the wireless connection improving internet speed and signal range. MIMO stands for “multiple-input, multiple-output” allowing the device to use multiple transmitters and receivers allowing it to transfer and process data faster than it usually should.

The Acer Chromebook 11 is a relatively inexpensive Chromebook that has long-lasting battery life. It has a plain and simple design that manages to stand out which is something of a feat. The screen of the laptop also has no noticeable glare making it a good choice for watching and viewing web content.

The Acer Chromebook 11 may not have the best specs but its remarkably low price and durable chassis are more than enough to handle most everyday tasks. It also has a dependable battery life that lasts for 9 hours and 13 minutes on video playback which is worth noting as well.

The Acer Chromebook 11 is definitely a practical and thrifty choice. The Chromebook isn’t very expensive and it has a ton of features that make up for its not so powerful specs. Features like decently long battery life, improved wireless connections, and a quality display that works well in both bright and dark settings.

You should buy this Chromebook if you’re on a budget and want something reliable to use. Its durable frame and chassis also ensure that it will last for a long time making it a good choice if you don’t plan to buy a gadget anytime soon.

If you’re the type of person who plays video games or runs resource-intensive apps and programs, then the  Acer Chromebook 11 may not be for you. Sure it has a fast and responsive operating system but Chrome OS can only do so much.

Hardware is an important part when it comes to playing video games as well as running editing software. You’ll need a good graphics card for this, a powerful processor, and a decent amount of RAM. 3 Things that the Acer Chromebook 11 does not have.

If you have the money to spend on a more powerful gadget for your games and applications, then we advise that you don’t buy this product.

If you think that the Acer Chromebook 11 is not for you yet you want something similar then you might want to check out the:

Acer Chromebook 11
If you’re looking for a cheap and reliable laptop that happens to support Ubuntu, then the Acer Chromebook 11 is a good choice. This laptop has a decently long battery life of up to 10 hours allowing you to use it for the entire day. Asides from this, the Acer Chromebook 11 also comes with tons of interesting and unique features that provide a lot of bang for its buck like its anti-glare display,  MIMO 802.11ac wireless technology, and extremely fast speed.
CHECK PRICE

The Acer Chromebook 11 is a good choice if you’re on a budget and want a portable device you can use work. Its small frame and lightweight make it good for traveling and its anti-glare display will ensure that you can see the screen even when you’re chilling on the beach.

If you think we’ve missed anything or left out some details about the Acer Chromebook 11, then feel free to comment down below.